Drummers with Kernow Pipes and Drums

Steve’s interest in drumming began as a young member of his local Army Cadet Force Corps of Drums. He then went on to play in various Pipe Bands around London and the home counties.  He feels very privileged to have played at prestigious events, tattoos and concerts in Germany, France and Belgium. He has played alongside the Irish Guards at the Met Police passing out parades at Hendon as well as the Tower of London, Whitehall Cenotaph, Chelsea Football Club and the Royal Albert Hall. Steve’s most memorable band job was playing alongside HM Royal Marine’s massed bands in Portsmouth.

Steve now loves playing in carnivals and festivals down here in sunny Cornwall and he is now Lead Tip of Kernow Pipes and Drums. 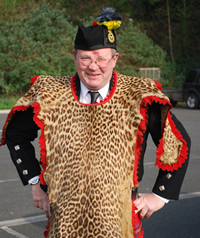 Keith Ives from St Mawes is a Kernow Pipes and Drums Bass Drummer.

His previous drumming experience was in 1974, playing a tenor drum in the Giggleswick School C.C.F. Band.

For 30 years he was a chef, having trained at the Savoy Hotel in London. He now runs a mobile knife and tool sharpening business. Other interests include Amateur Dramatics – he is the Stage Manager for St Mawes Players. 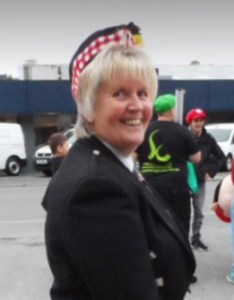 Sue plays and teaches bass drum and is married to piper James. 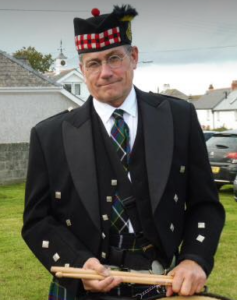 Chris joined Kernow Pipes and Drums in 2016. Previously he has played side drum and bass drum with the Golowan Band (in Penzance), Penzance Guisers, The Hornets Street Band and bohran in traditional music sessions and settings.

He plays the snare drum and provides occasional backup on the bass drum.

Beth joined as a tenor drummer and is now learning snare as well. 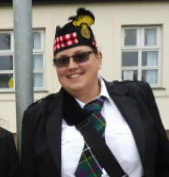 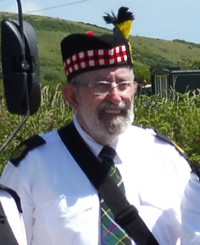 I started with music with piano lessons, then accordion. Followed with playing cornet with the sally army in Manchester. I then played with various camp bands in the RAF as drummer/bugler. Now I have the pleasure playing with these lovely folk!

I wanted to learn the pipes after my father’s death, as he was a big fan of the bagpipes, so I joined Kernow Pipes and Drums in 2016. Throughout 2017 I slowly progressed with the pipes while joining the band on their appearances as “water boy”. As it was a slow progress, I decided to learn the tenor drum in the meantime and marched with them for the first time at the Truro City of Lights January 2018.

Henry is currently our youngest member and is learning snare drum. 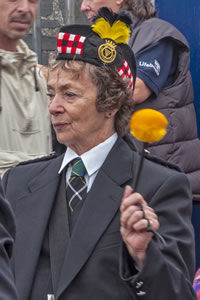 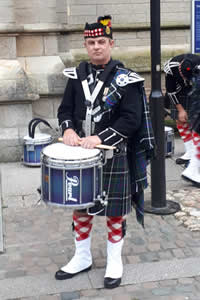 Snare drummer Matt joined us from another band, so he hit the ground running and is a valued member of the drum corps.

Snare drummer Tom Wheeler joined the RAF as a boy apprentice and served for 34 years, reaching the rank of Squadron Leader before he retired.  Following this he worked as an Airfield Electrician at Newquay Airport. 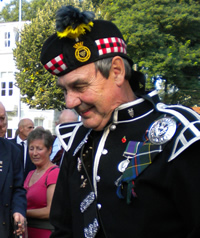 Tom previously played with the RAF band for five years and following moving to Cornwall, he joined the Cornwall Caledonian Band, then later moved to Kernow Pipes and Drums, where he has been playing for the past four years.  He has also played with Exeter City Pipe Band, visiting Spain celebrating the 70th Anniversary of the famous battle for the bridge at Arnhem (John Frost Bridge).  Tom has also played with the Royal Regiments of Scotland at the Gelledrome Stadium, home of FC Arnhem, Holland.