The weather had been fine all day and continued sunny with a cool wind right into the evening. The Band met at the Pipe Major’s house at 16.30 hours ready to be ferried to the assembly point at the junction of the Surgery and Tesco Express, where the other Bands met. The dress code was No. 1 Dress with white shirts. It was an excellent turnout of 9 pipers, 6 drummers and Drum Major.

The Band’s marching position in the procession was at the rear of the first section. Other bands taking part included the Tretherras Samba Bands from Newquay and Wadebridge, The Jumping Out Jazz Band, Newquay and St Austell Silver Bands, City of Truro Pipes and Drums, the Falmouth Dakadoum Samba Band with dancers, and the Newquay Air Training Corps Band.

The Carnival started on time with two Fire engines leading and numerous walkers in fancy dress. Following was the Lusty Surf Life Saving Club and RNLI Lifeboat and their larger than life bearded mascot bringing entertainment to the children in his wanderings. Other entries were fed into the procession as it passed as was the Blue School from St Columb Major with its large collection of children with painted faces and fancy dress who fell in behind the Kernow Band.

It had been a slow start with initial hold-ups and nearing 18.00 hours before the Band marched out playing the High Road to Gairloch Set. The town was packed with families who showed their appreciation in clapping and cheering enthusiastically as the Pipers and Drummers passed by. The Members looked sparkling as they marched in the sunshine with their white shirts and spats, and the music was impressive especially with the new drumming embellishment. It was a long walk and at 19.00 hours the Band was brought to a halt and dismissed just below Sainsbury’s car park.

Members entered a nearby public house overlooking the beach and spent time in the outside seating area enjoying rest and refreshment. Some not looking forward to the trek back along the coastal road opted for the bus service and waiting outside the British Legion Club. Inside there was a party going on for the Lions Club hosted by RAFA. The evening Master of Ceremonies approached the band members with an offer of a glass of Port in return for a performance for the guests.

The 3 pipers, 2 tenor drummers, bass drummer and Drum Major accepted.  There was loud appreciation from the packed room as the band finished and the MC called to his guests to raise their glasses to the Band and soon after a mini bus arrived to convey them to their cars.

Tunes played during the Carnival included the following – Green Hills/Battles O’er, Scotland the Brave/Mairi’s Wedding, Cockney Jocks/Rainbow Country/Bluebells of Scotland, High Road to Gairloch/Murdo’s Wedding/Bonny Lass of Fyvie and Scotland the Brave/Rowan Tree/Wings/Bonny Galloway. It had been a vibrant Carnival in superb weather – an enjoyable late afternoon event. 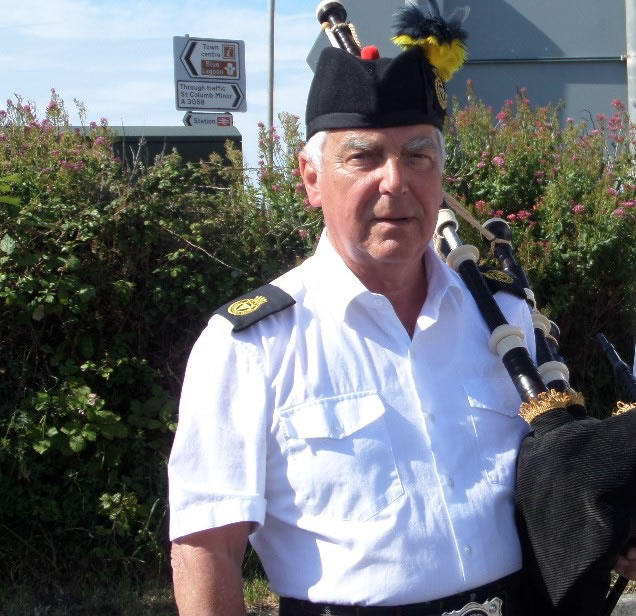 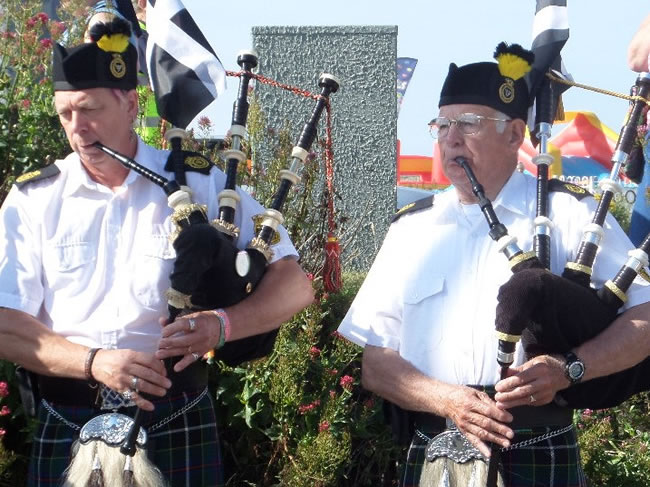 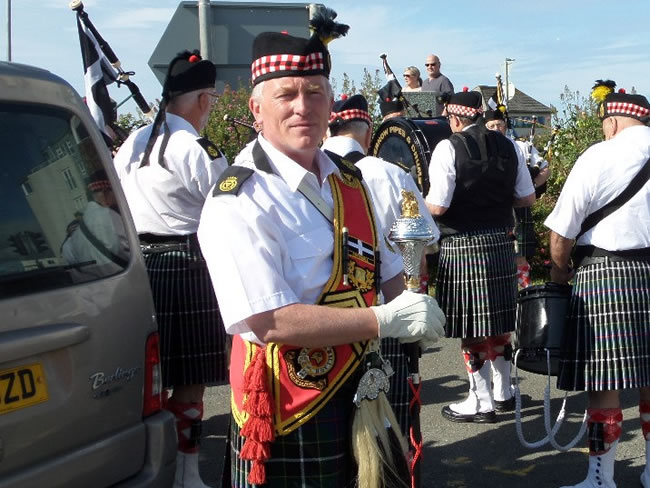 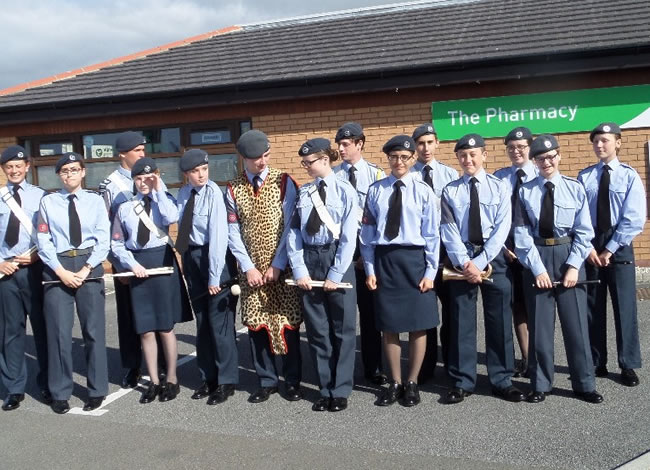 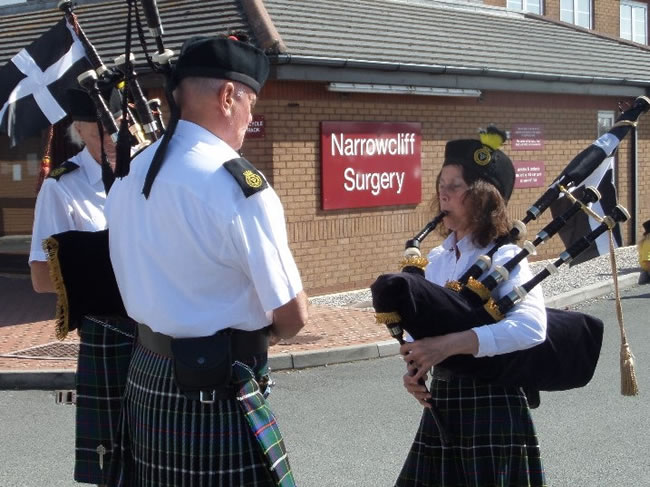 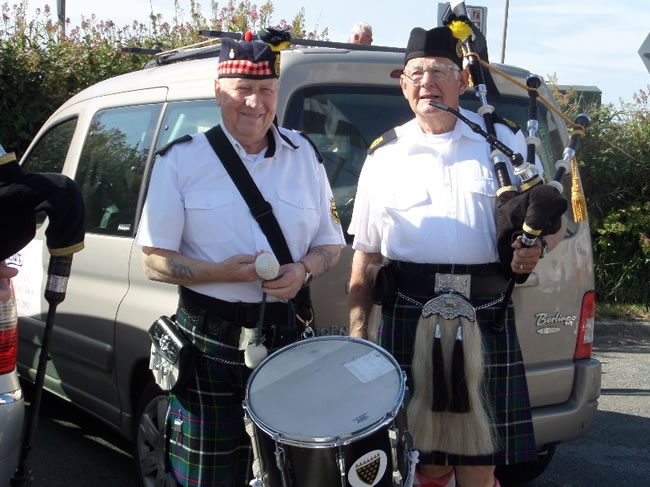 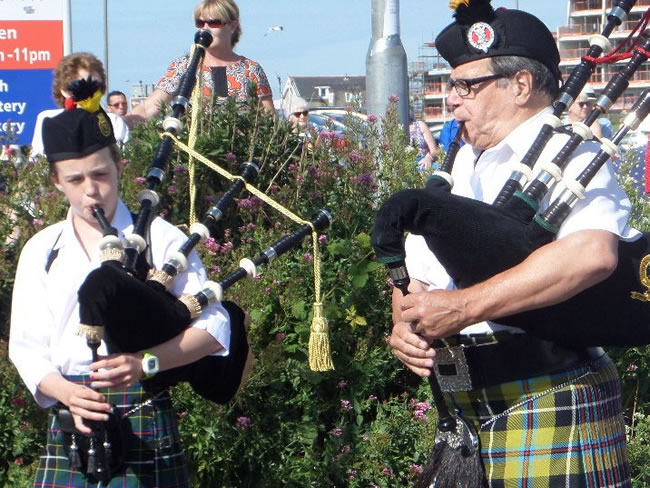 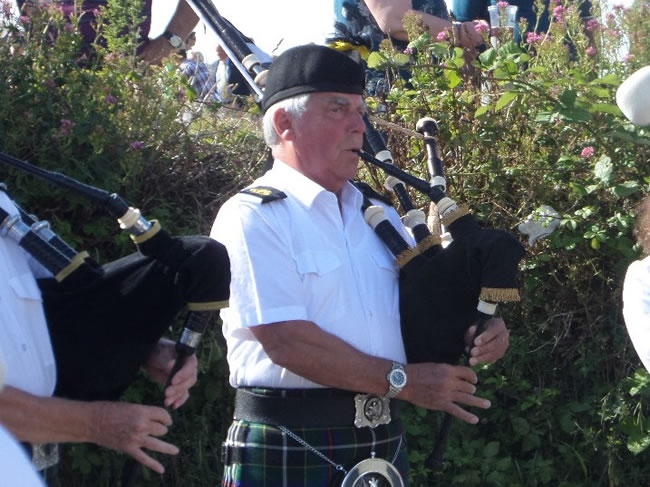 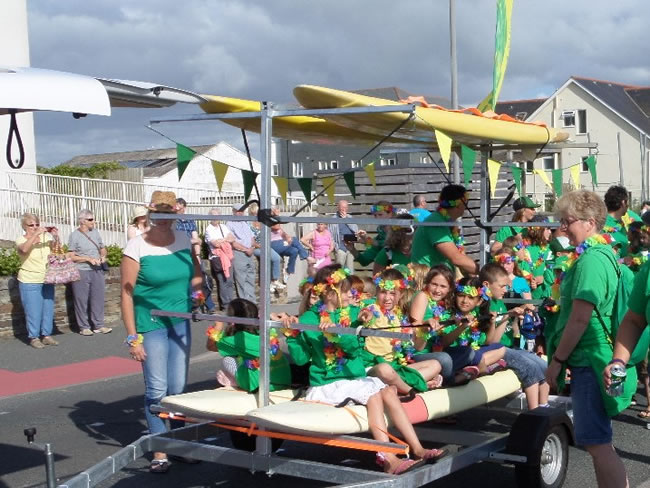 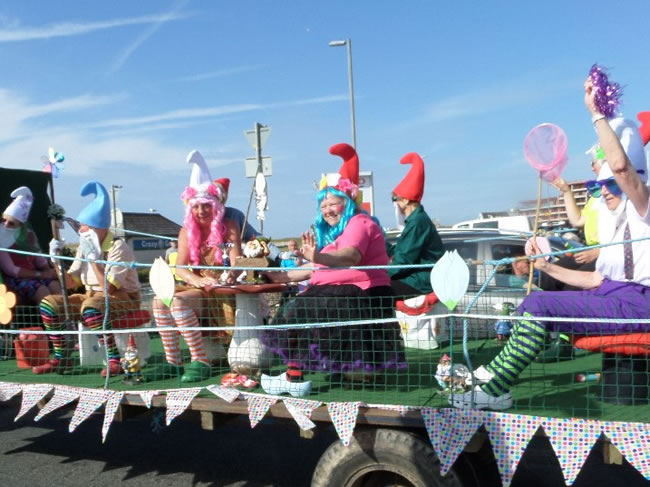 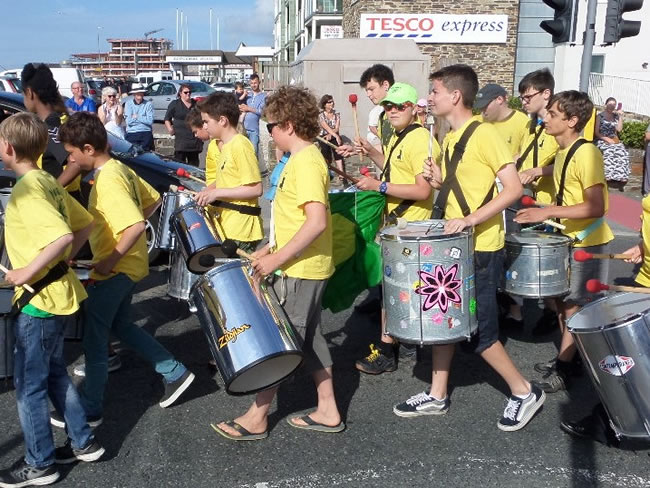 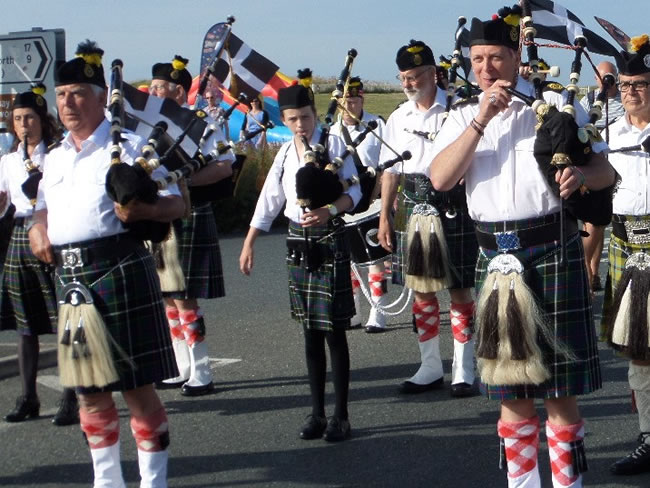 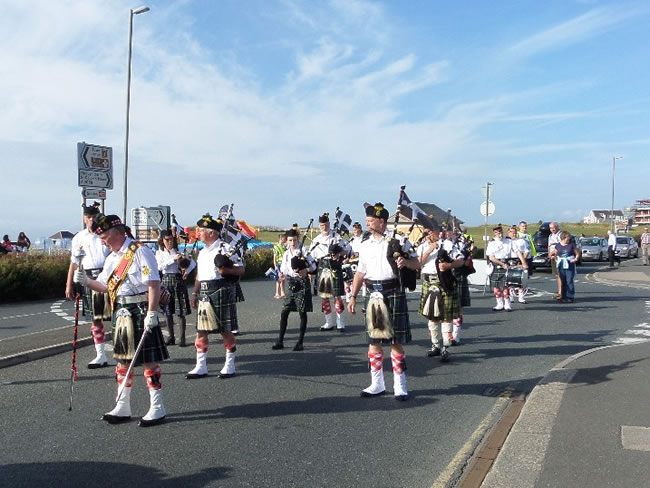 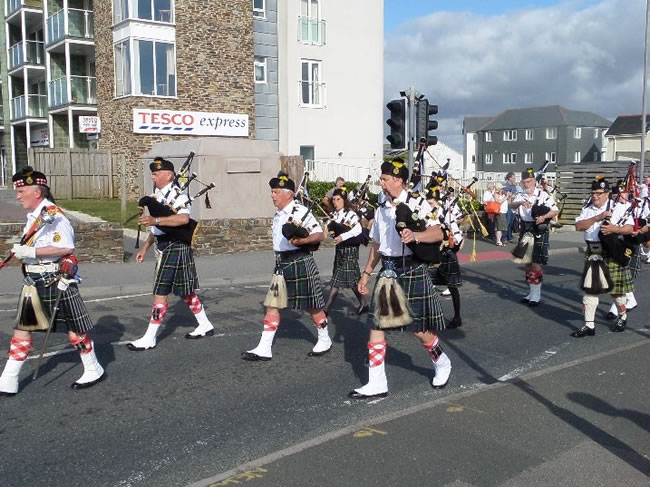 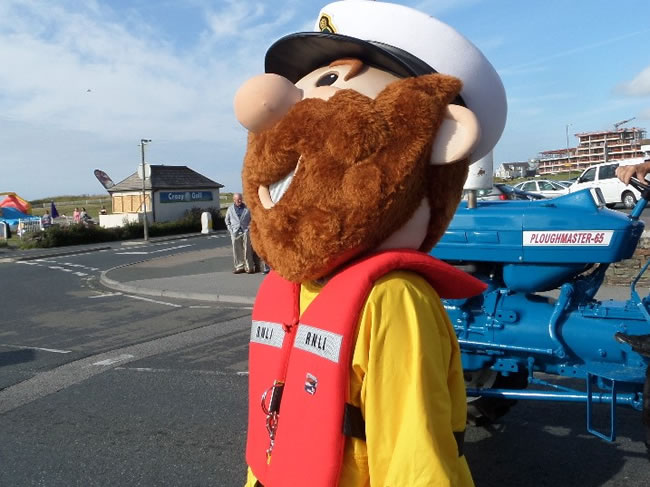 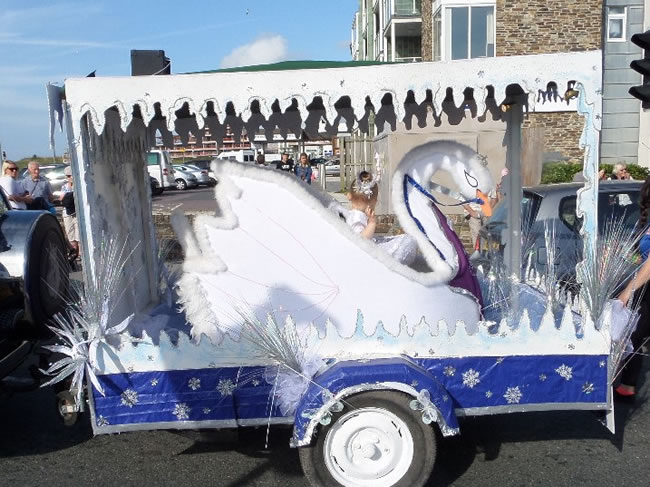 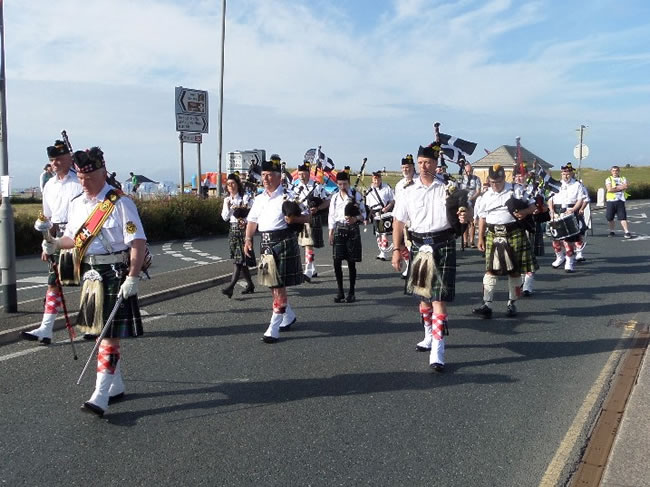 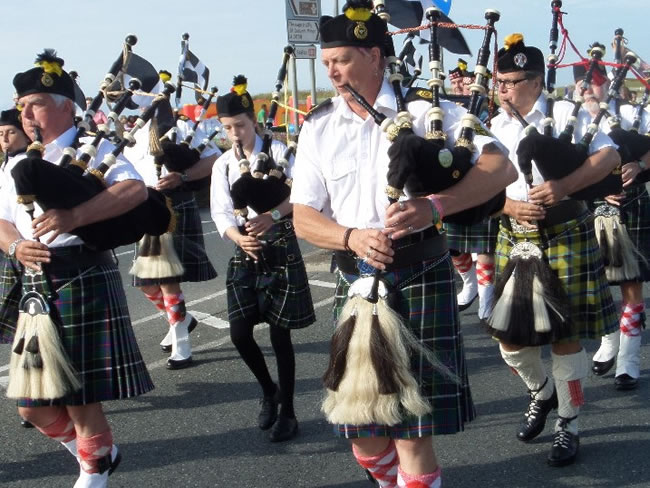 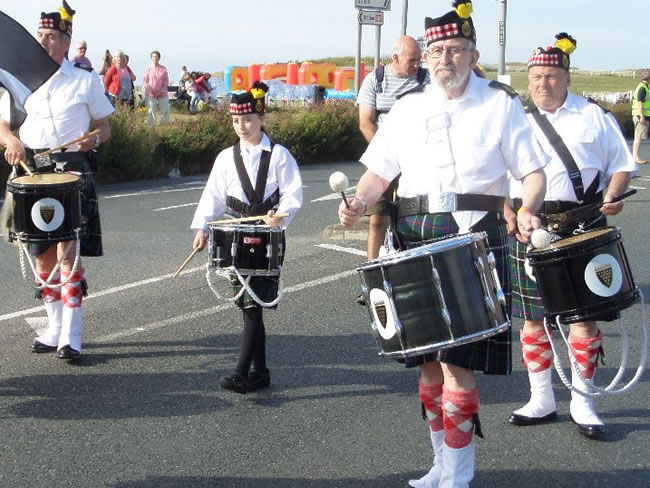 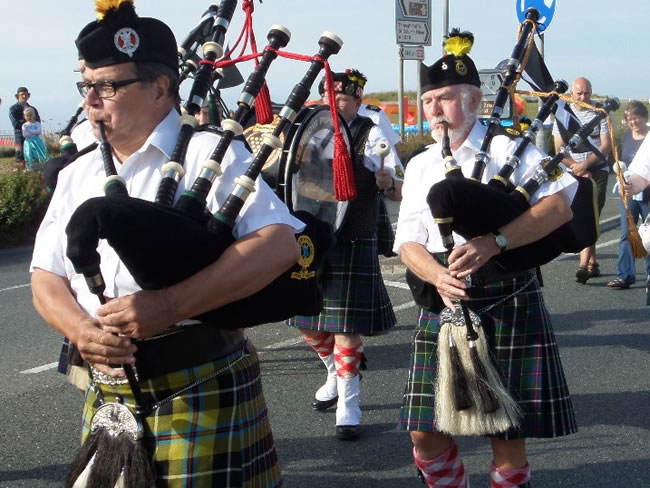 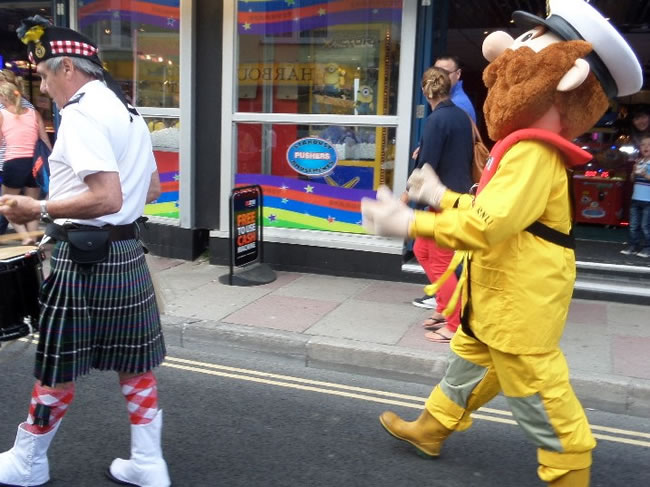 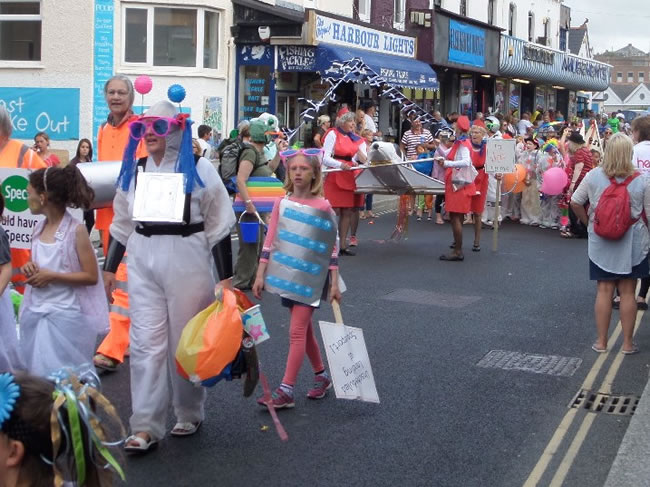 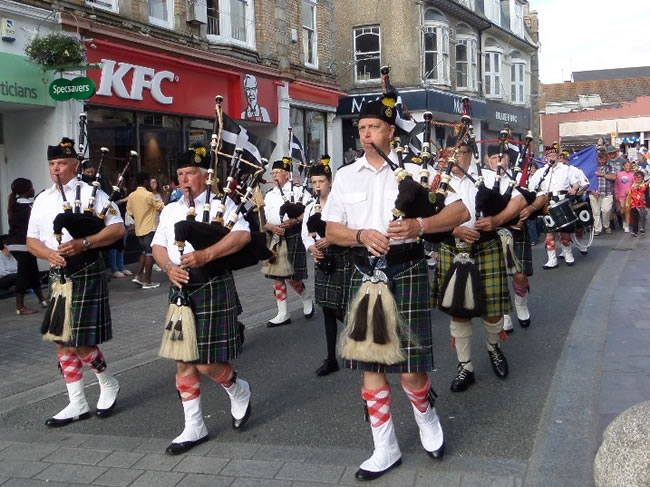 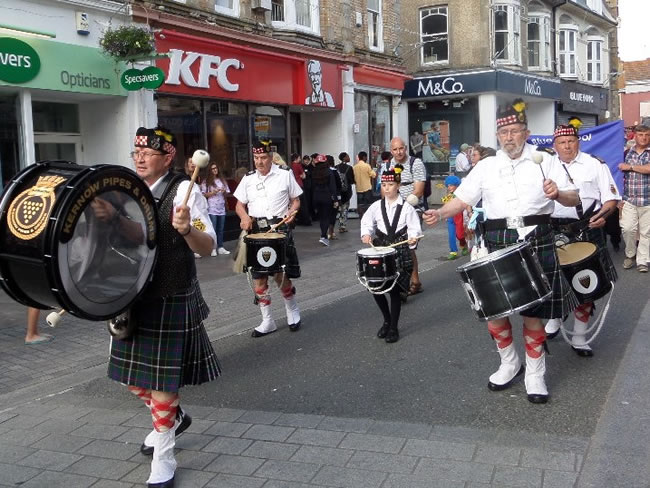