Saturday dawned cloudy for this prestigious event in Bideford of the Massed Bands Parade and Carnival, although the forecast was showers it turned out a dry day and Dress code was No 1s with bonnets. It was a good turnout of 10 pipers and 5 drummers and Drum Major. As last year the assembly point was in the car park of the old Cattle Market which was adjacent to recreation grounds containing a rugby/football ground, bowling green, children’s play area and a funfair.  Other Pipe Bands taking part in the Massed Bands were Bideford, Epping Forest, Newport/Cheltenham, Tarka, Plymouth, Bristol, Shirley (Birmingham).

16.30 hours and a rehearsal took place in the rugby pitch where marching positions were sorted out with counter marching and running through some tunes. During the rehearsal the Bideford Band marched to the front of the Parade, where they led the assembled Bands with their solo start of Highland Cathedral. An hour later and the bands were dismissed to make their way to the start of the Carnival.

18.00 hours and the Carnival started led by various Fire safety vehicles, and followed by Bideford Royalty, decorated floats and various Carnival Queens from surrounding villages, Majorettes, RAF Cadets, and the eight Pipe Bands were slotted in among the entrants. Also taking part were the numerous fancy dressers, some bearing large floating mobiles, Brownies, and the Barnstaple Youth Marching Band. The town was crowded with locals and visitors who were enthusiastic in their applause.

As the Carnival proceeded along the main route the various bands turned in to the side streets to wait its return to rejoin at their allotted slot in the procession. By 19.30 hours the Carnival had run its course and the Bands fell out to partake of the free pasties and drinks which had been kindly provided by the Organisers. After the break the various Bands formed up again and marched as the Announcer introduced each Pipe and Drum Band, the name of their kilts, and where they were from. They played their own repertoire to the crowds, along the Quay and past the VIP area where they fell out at the High Street and walked across the old bridge and formed up in the Massed Band Assembly area.

At the appointed time the Massed Band marched over the old bridge, turning right to march along the Quay, playing Steam Boat, 100 Pipers, Bonnie Dundee – Green Hills, Battles O’er, Lochanside. As the Band marched along the Quay the tunes were, Teribus, Barren Rocks, Brown Haired Maiden, Mairi’s Wedding and in their Finale positions played Scotland the Brave, Rowan Tree and Na Awa Tae Bide Awa. Whilst static the tunes played were My Home, 10th HLI Crossing the Rhine and Cock o’ the North. There then followed a Tribute to the 200th Anniversary of the Battle of Waterloo. Bideford Youth Pipe Band started Highland Cathedral and everyone then joined in.

It had been a lovely lively Carnival full of atmosphere and cheer and made all the more entertaining by the individual Bands interspersed within and later on there was nothing quite like the emotive sound of the Massed Pipes and Drum Bands. 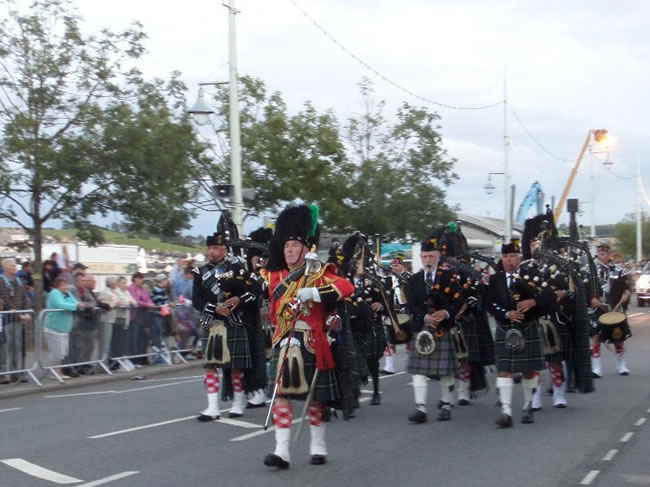 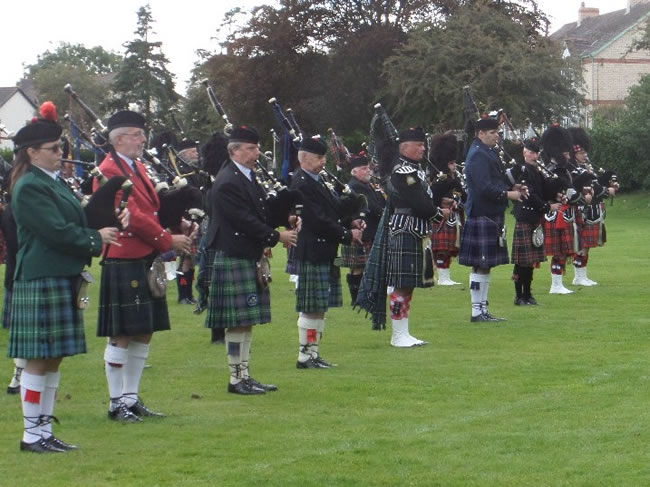 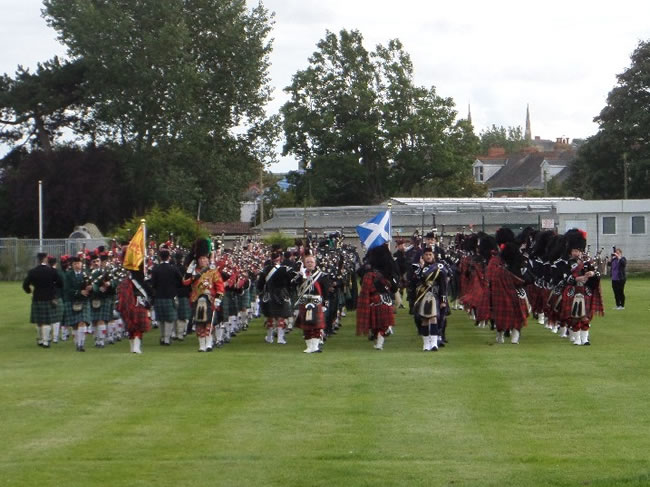 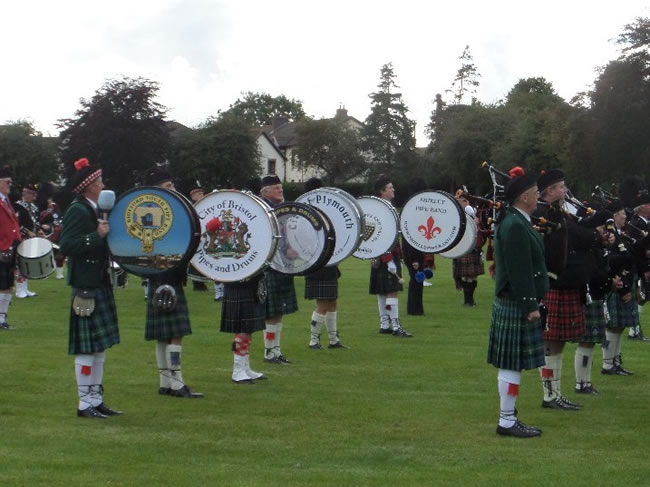 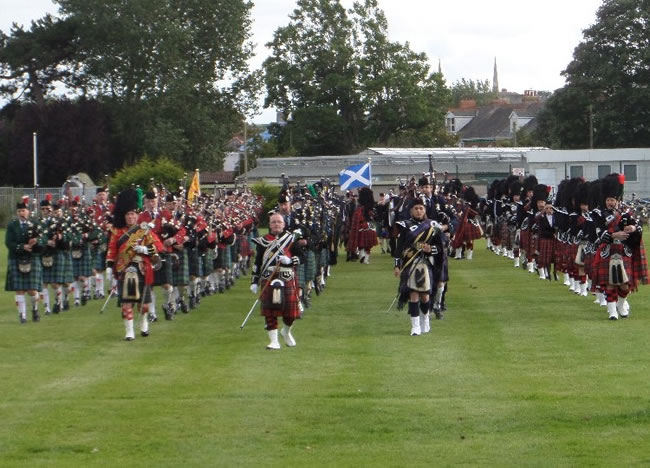 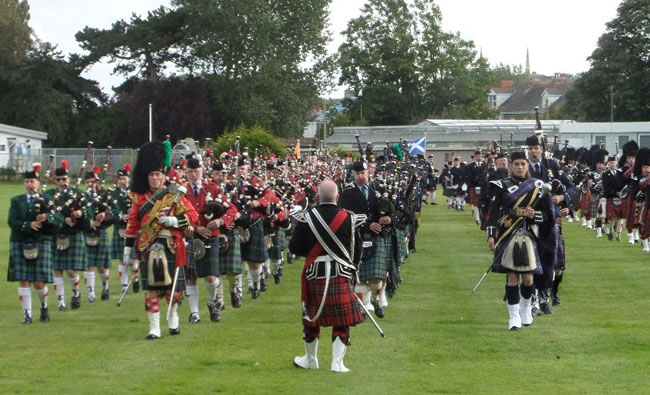 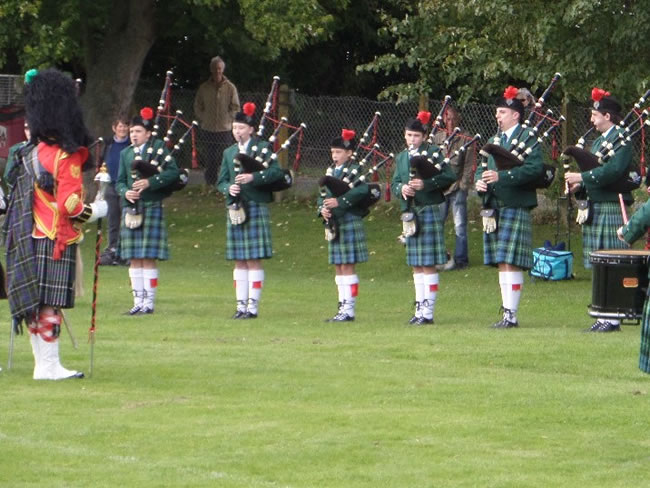 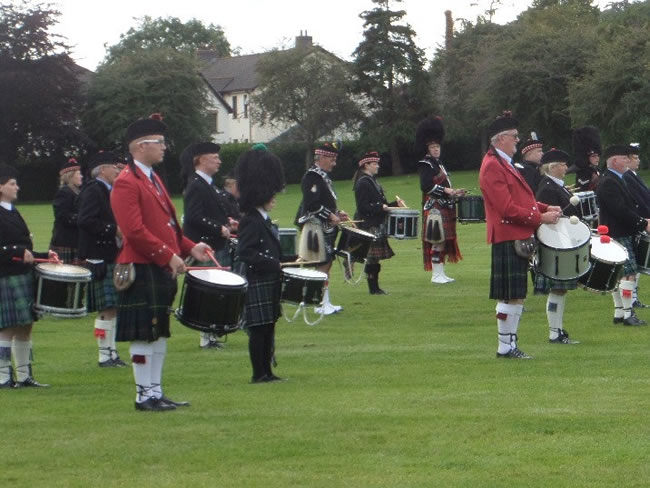 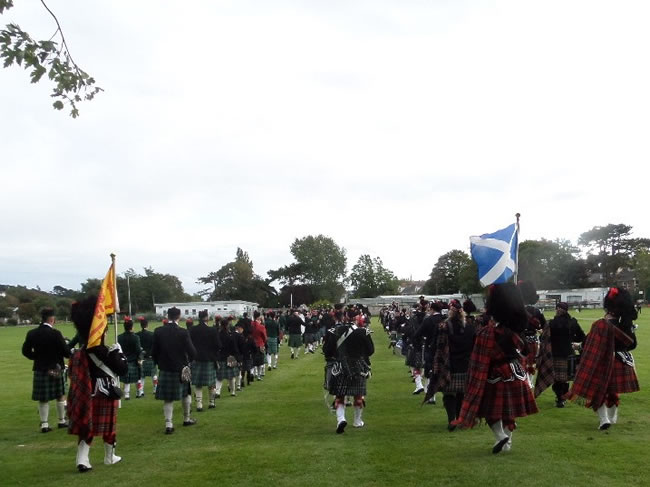 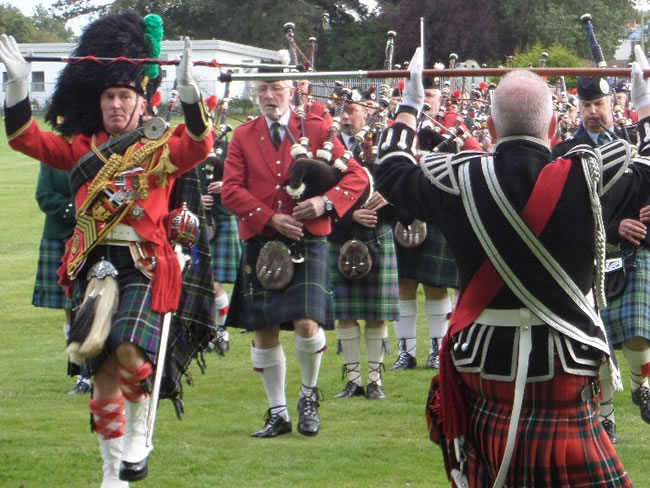 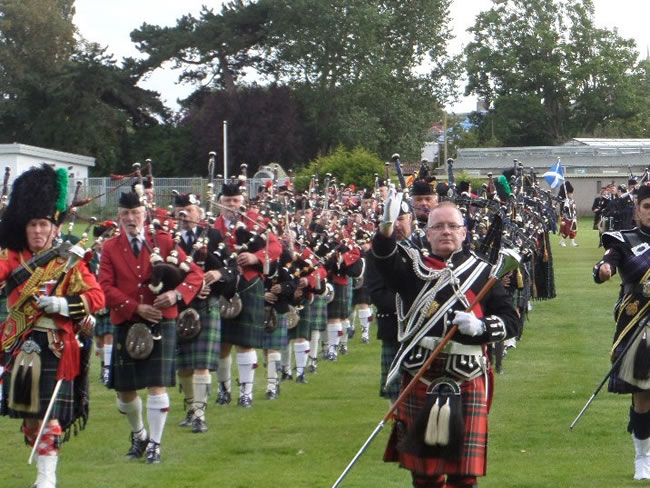 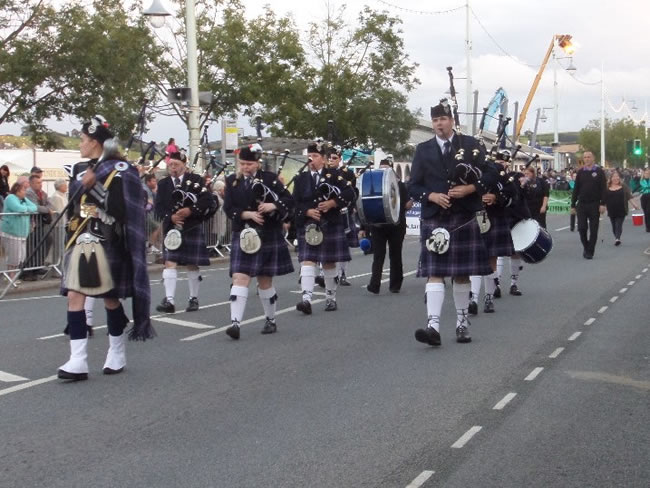 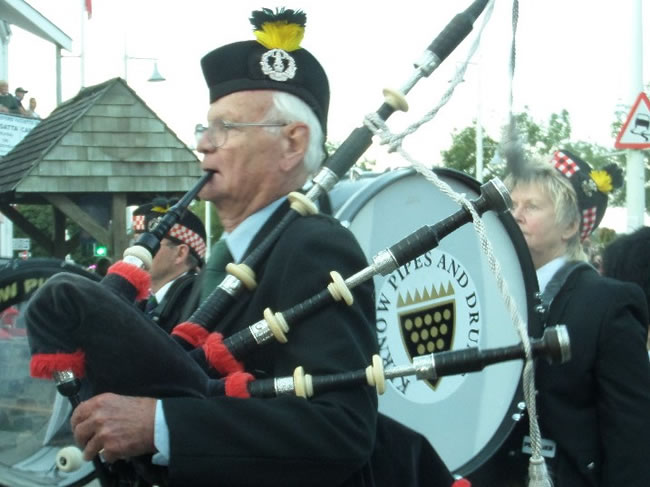 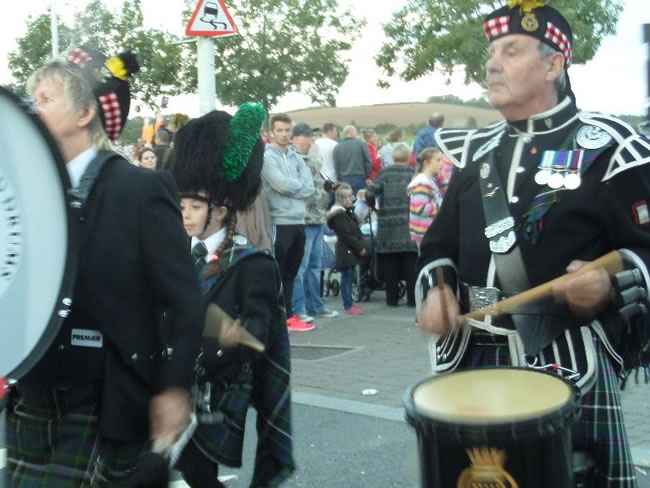 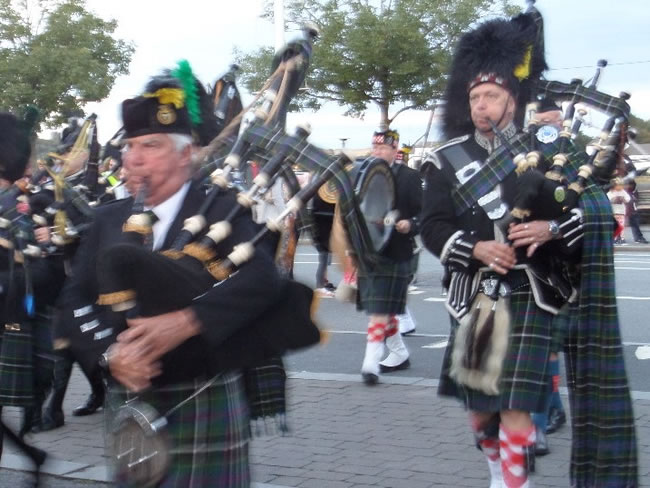 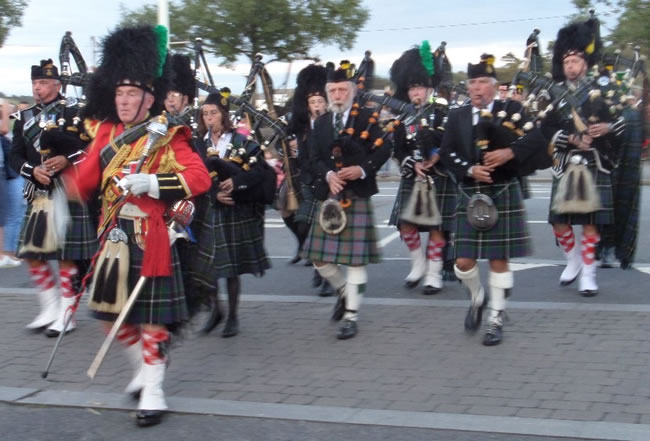 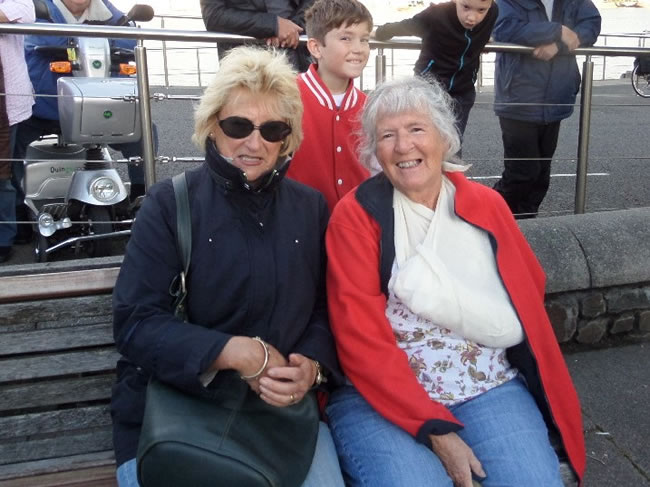 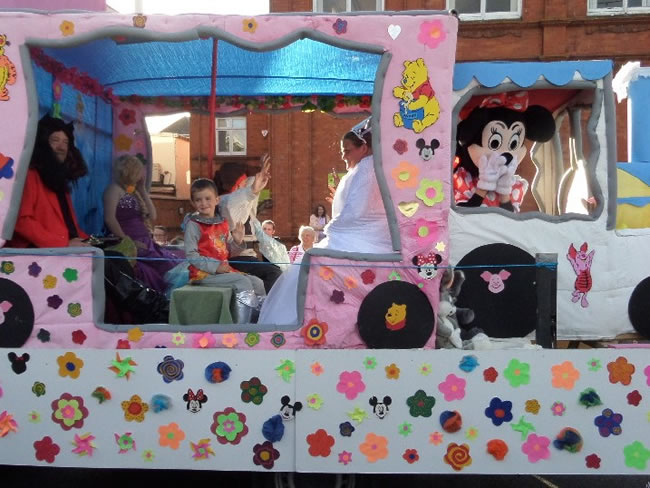 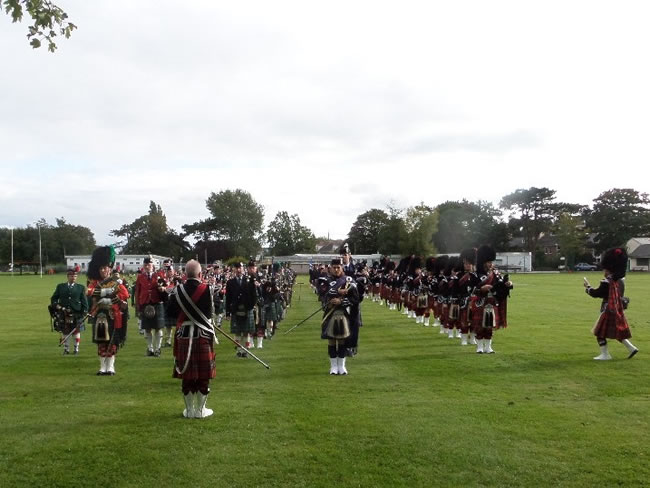