The venue was the stunning Trebah Gardens situated near Falmouth. After a cloudy start the weather for the Band’s engagement was perfect with blue skies and sunshine, although showers were expected at some time.

The dress code was No 1s with bonnets and capes and Glengarries if showers occurred. There was a good turnout of 8 Pipers and 7 Drummers and Drum Major. The Band were assembled in the small car park by 10.15 hours ready for a warm up of the pipes. At 11.30 the Band moved to the main car park to pipe the Standards, and the Parade down to the House lawns where the Standards were dismissed and the Band formed a semi-circle on the sloping lawn and played. The Veterans were in evidence from all over the world, the USA in particular. After 20 minutes the Band retired for a provided lunch of pasties and welcome rest in the warm sunshine.

The impressive celebration on this sombre occasion had its lighter side today in the form of the entertaining singing trio of ladies, The Ritzy Belles and The Shanty Singers who took the stage on the lawn at various times during the day.

After lunch the Members walked half way down through the gardens, waiting at the starting point to march the Standards down to the beach for the Memorial Service. Meanwhile the Military vehicles ferried Veterans and Dignitaries down to the beach.  It was an impressive sight as the Band came down the final steep approach, marching carefully over the slippery stones, leading the 30 plus Standard Bearers to take up their final position for the Drum Head Service.

The vicar opened the Service with a brief history of Trebah’s involvement in the D Day Landings – of how the beach was an embarkation point for the 29th US Infantry Division destined for the assault landing on Omaha beach in Normandy. During his speech he paid tribute to the whole community involved at that time, wives, brothers, fathers, friends and relatives who all united in their support of one another. Abide with Me was then sung followed by one more hymn and joined in by the large congregation seated on the beach. The Bugler played The Last Post/TAPS/Reveille and “They shall not grow old …… “  and  “at the going down of the sun ……. “ followed.  A Band member then played The Lament.

There was a waiting period as everyone searched the skies before the RNLI helicopter came, circled round the bay twice before hovering near the RNLI boat and lowering a man down to lay a wreath on the calm waters. Later the Red Arrows came and did not disappoint the waiting spectators – spectacular in their perfect formations and colourful smoke trails across the sky.

Soon the military vehicles returned the Veterans and Dignitaries back up to the house – and some band members were glad of a lift with their drums and pipes while there were others who chose to wend their way back up through the picturesque scenery to the top lawn where the welcome refreshment of a cream tea was waiting. After the break the Band formed a circle on the lawn and played for 20 minutes before dismissal and The Ritzy Belles then took the stage and sang their Forties songs.

It had been a moving experience for everyone in the wonderful surroundings that are Trebah Gardens and thankfully the forecasted showers had not materialized. 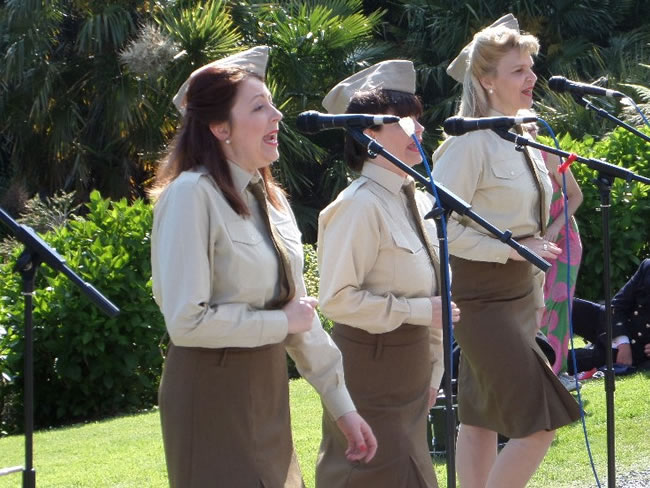 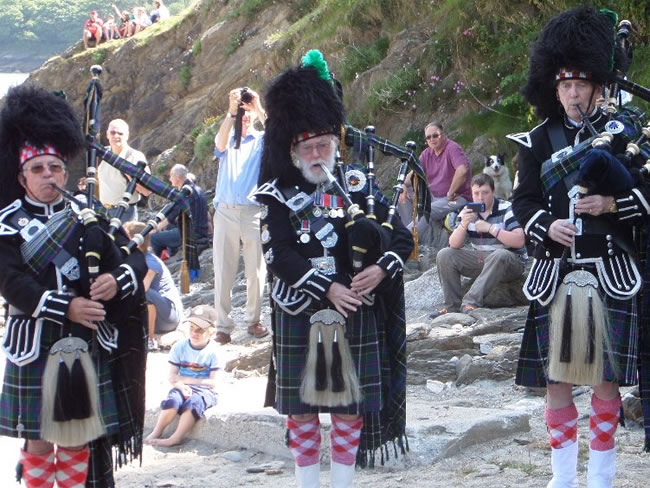 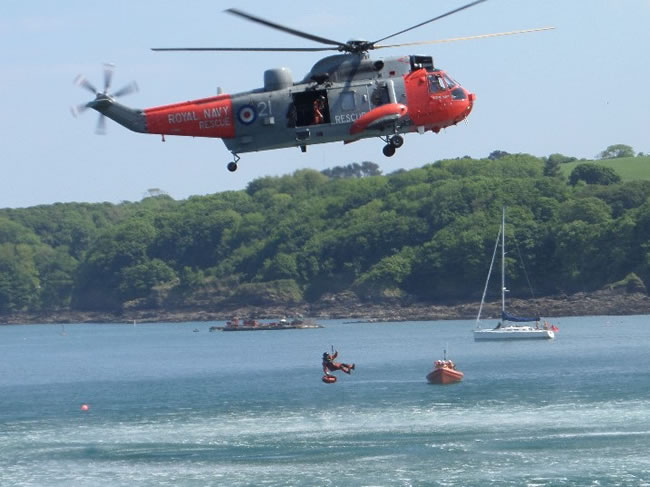 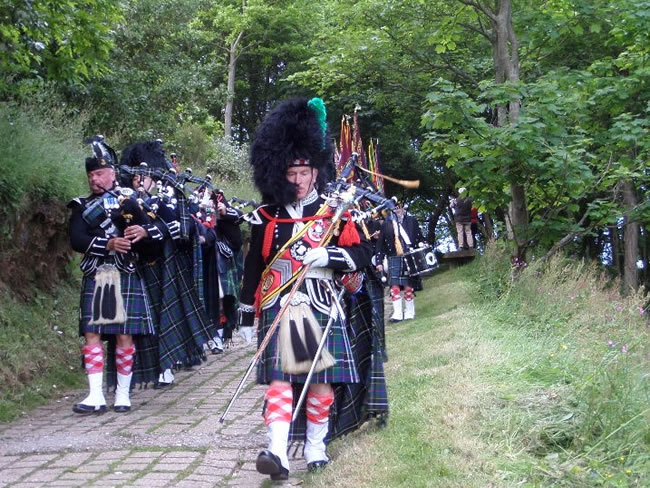 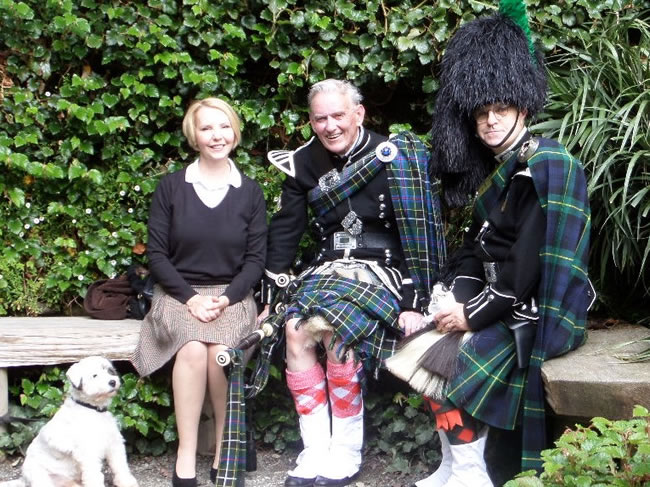 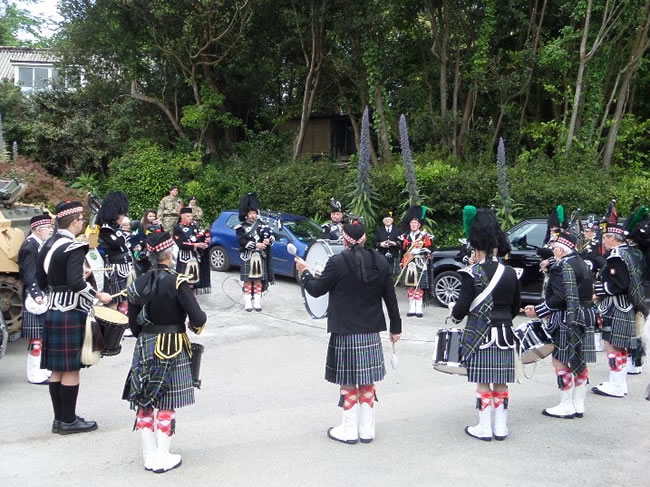 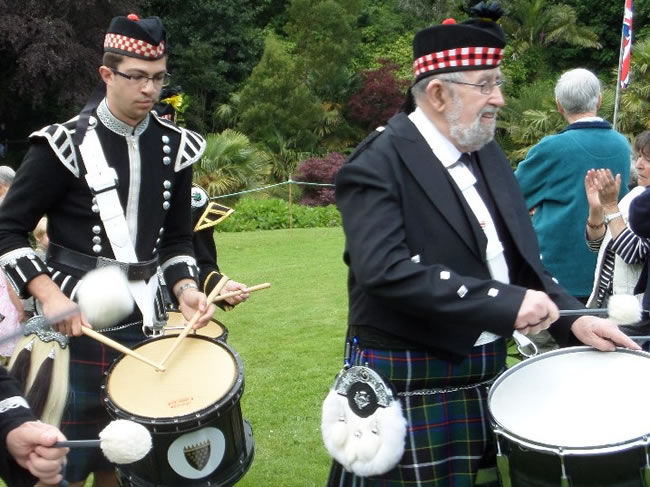 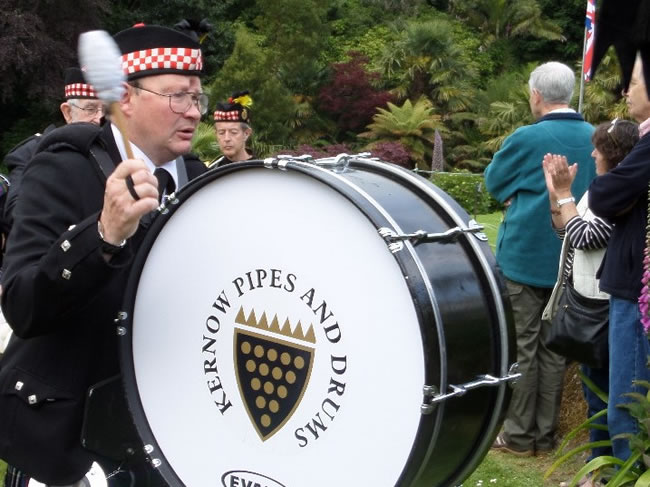 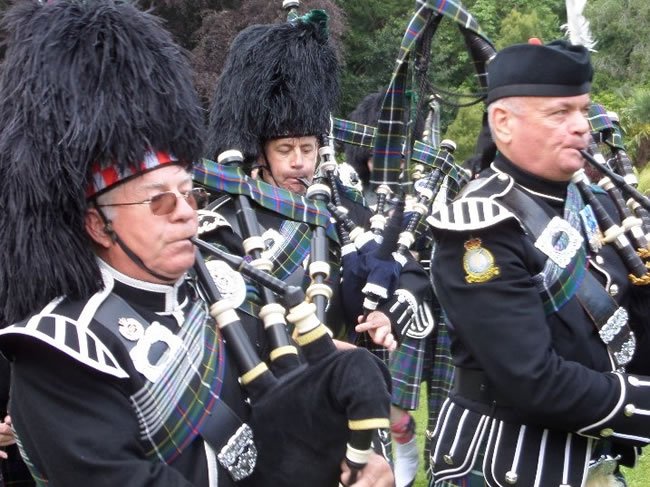 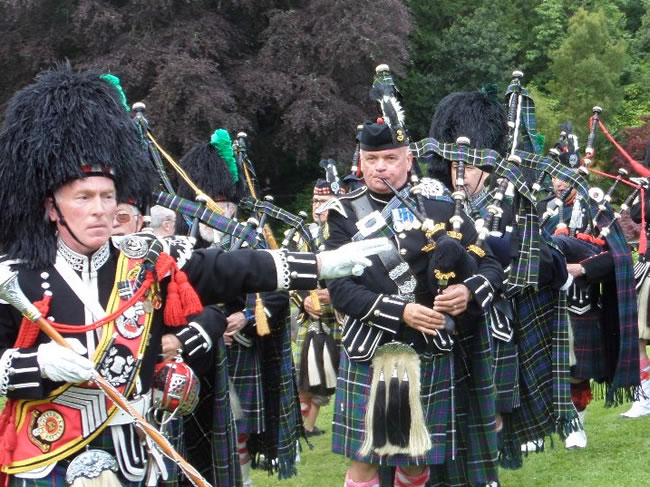 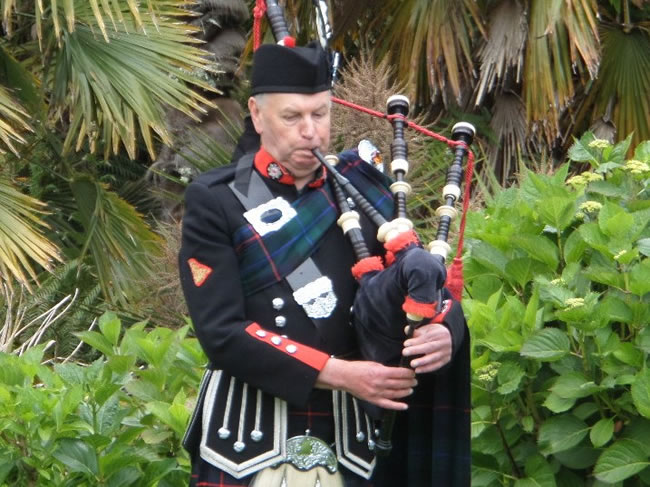 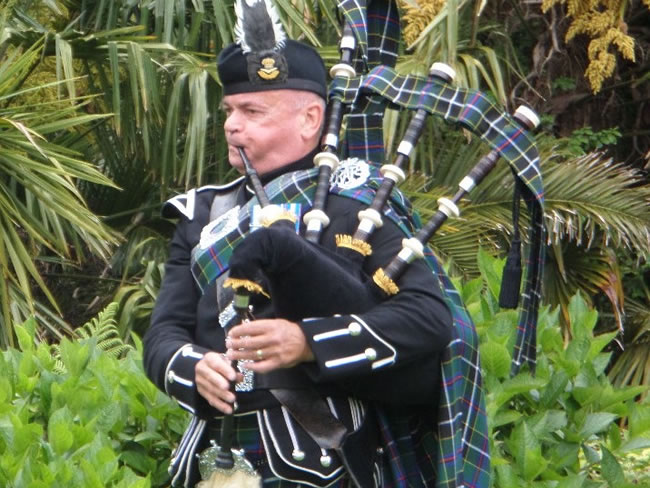 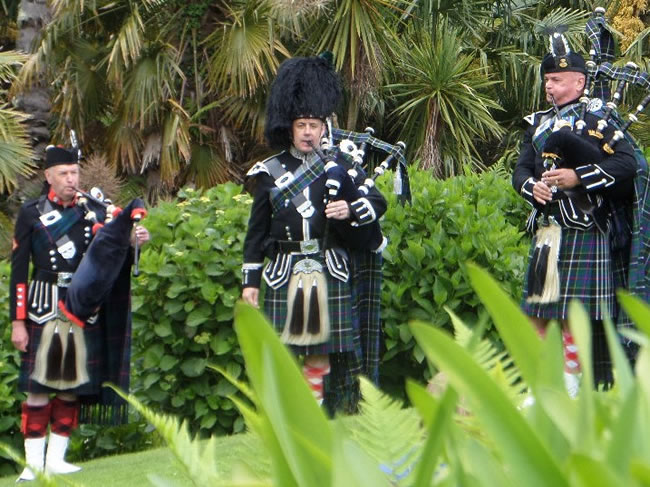 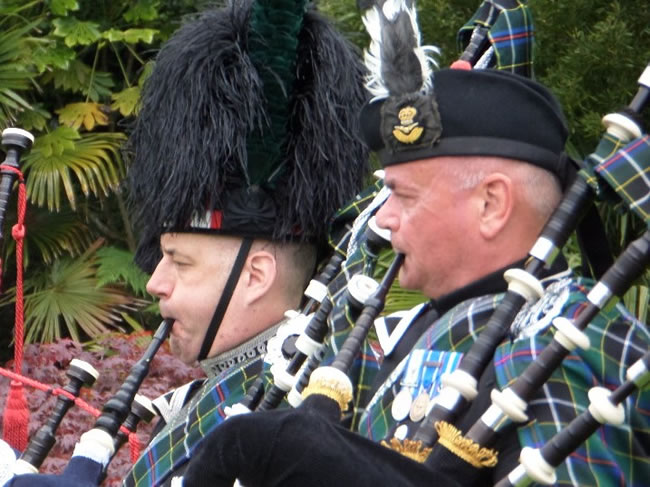 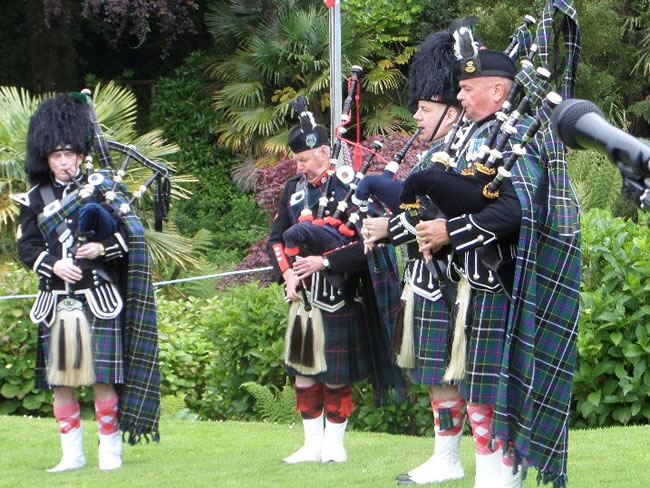 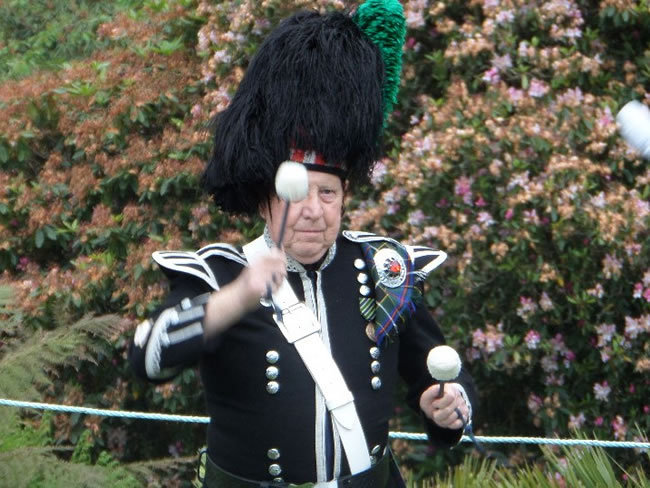 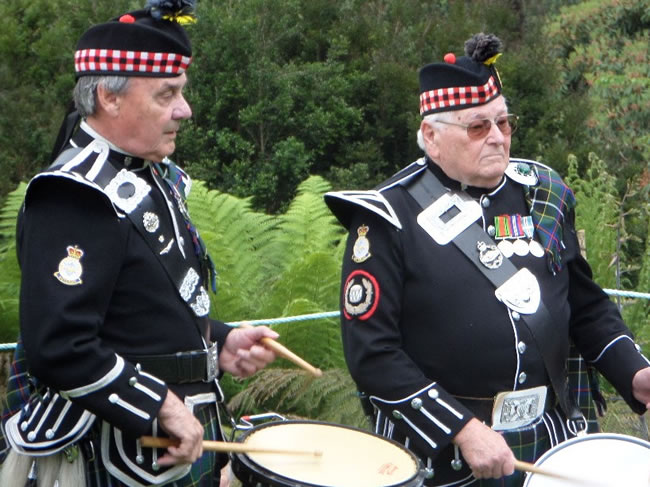 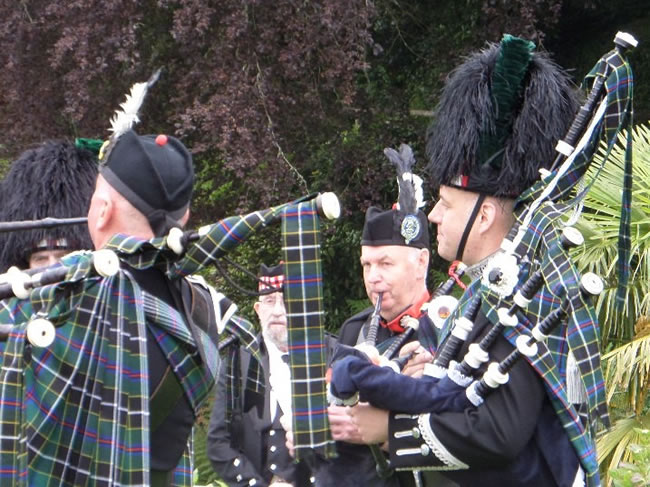 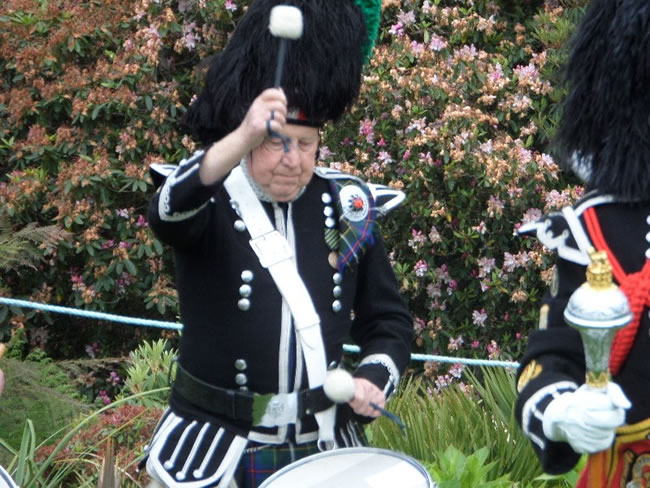 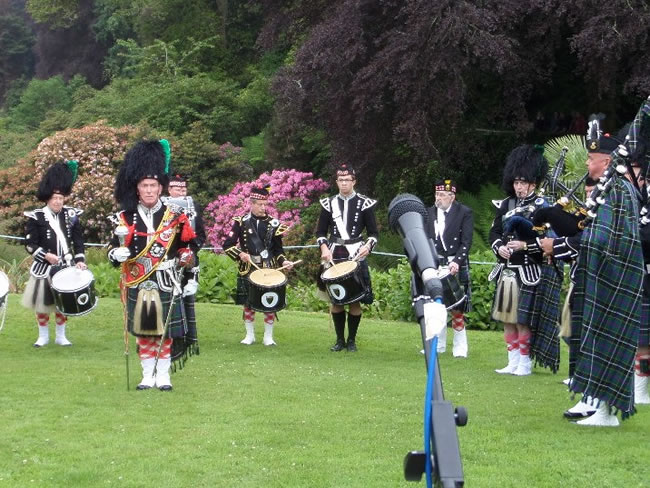 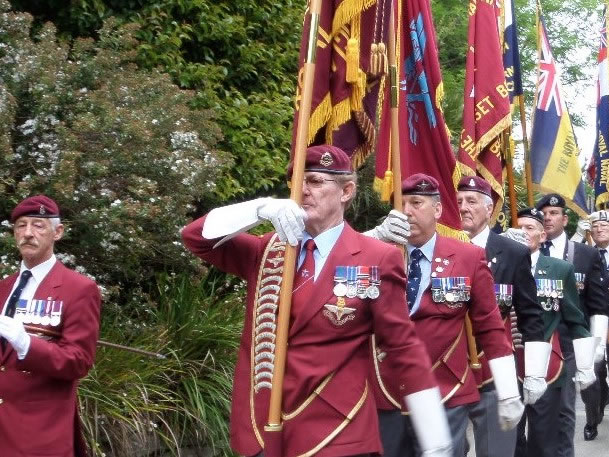 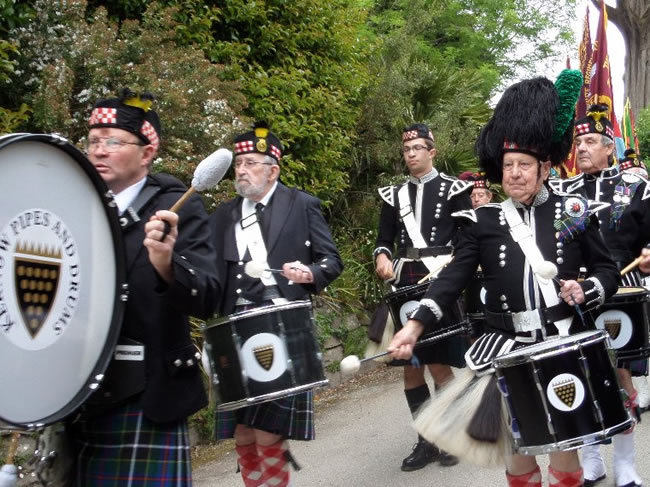 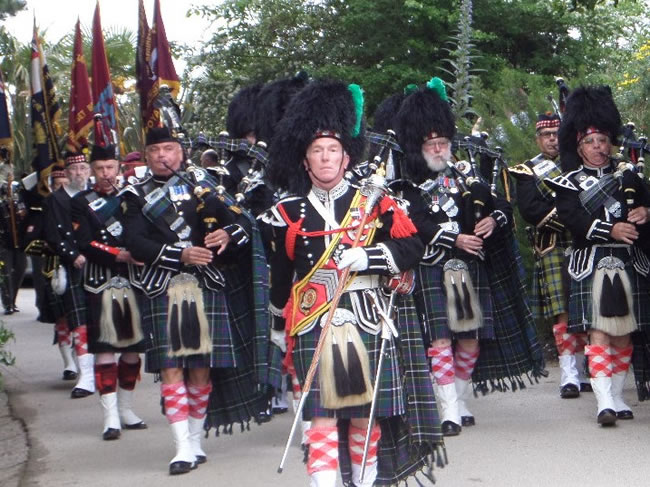 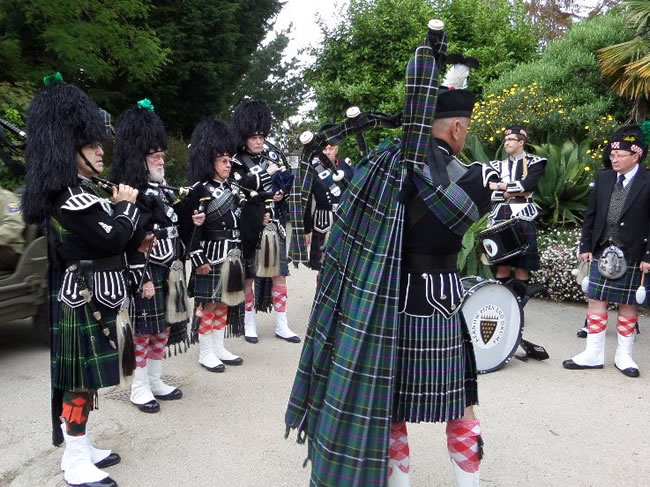