The evening was a cloudy one with fine rain in the air and a strengthening breeze. With the forecast that the County would endure the remnants of a Hurricane tomorrow it was generally hoped the rain would at least be delayed until then. But it was in drizzly rain the Kernow Band Members met in the main car park in Wadebridge well before 17.30 hours.

It was a good turnout of 10 pipers and 5 drummers which included the welcome addition of two guest drummers (at very short notice) and a Bass Drummer and Piper from the Tarka Pipes and Drums Band and the Kernow Drum Major. Everything was set for a good Pipes and Drums event in the Carnival.

The Dress Code was Day Dress with the option of donning capes if the drizzle turned to heavy rain. The Kernow Band formed a large circle for a short practice in the Carnival field and at the Pipe Major’s invitation the Bideford Band joined in for a tune-up session with the Kernow and Tarka Bands Pipes and Drums. The practice drew an appreciative crowd as the massed bands played. The decision to not wear the capes came from the Pipe Major just before the Parade started off at 19.00 hours as the light rain was spasmodic and it was considered waistcoats and jackets would suffice.

A magnificent array of 2 and 3 seater motor bikes led the Procession with the Kernow Band marching in a position around the middle of the Parade. They sounded impressive and there was many a Cornish flag flying from the bagpipes and the crowded streets rang with appreciative clapping and cheering. There were two Samba Bands taking part and the usual comical and highly imaginative fancy dressers, floats depicting Cancer Research and World War I (presented by the Avalon Youth Theatre), and Pirate Fairies to name but a few. Then there were wonderfully decorated floats and cars holding Fairy Queens and their Attendants – it seemed from most of the Cornish villagesl! It took half an hour for the end of the procession to leave the field – the last entrant was a float filled with comical characters in fancy dress from the Wadebridge Fire Brigade followed closely by their fire engine.

The long procession went up the busy high street and up over the hill in a wide arc to circle the town by which time the rest of the parade had been clear of the high street and the parade could take the return road back to the carnival field. It was 19.30 and the crowds whilst waiting for the Parade to return, folded up their umbrellas  as the rain had all but fizzled out. Back in the carnival field the Pipe Major had a few words with the Band before dismissal.

Some members retired to the British Legion Social Club for refreshments and whilst there on invitation six pipers took to the stage for a fine rendition of a short medley of tunes to appreciation from the audience. Outside the heavens opened to torrential rain and a few of them on leaving for the car park got very wet!

It had been an interesting evening and though a watery one the weather had not put the crowds off – it was a good carnival that never disappoints. 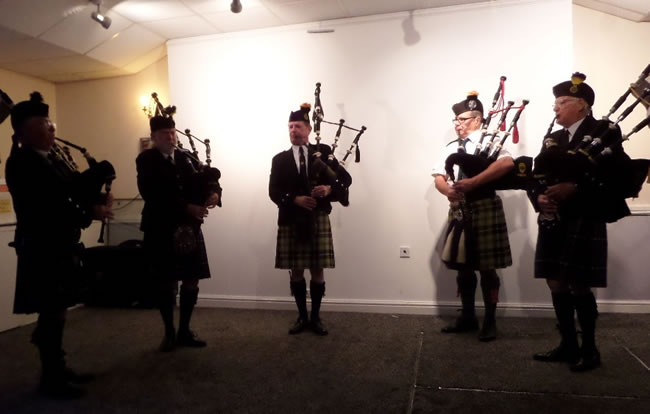 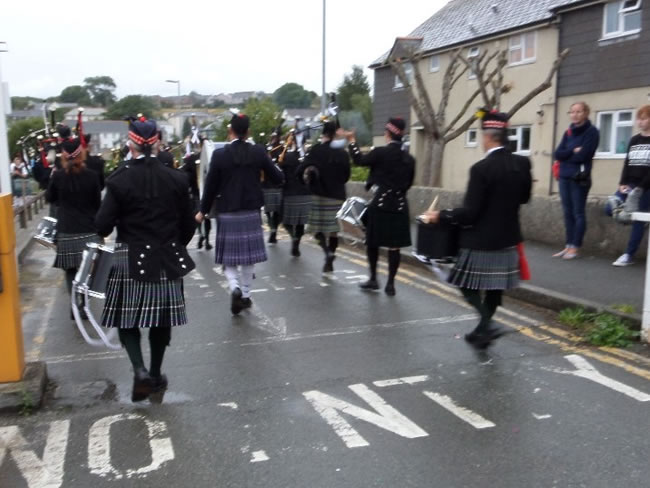 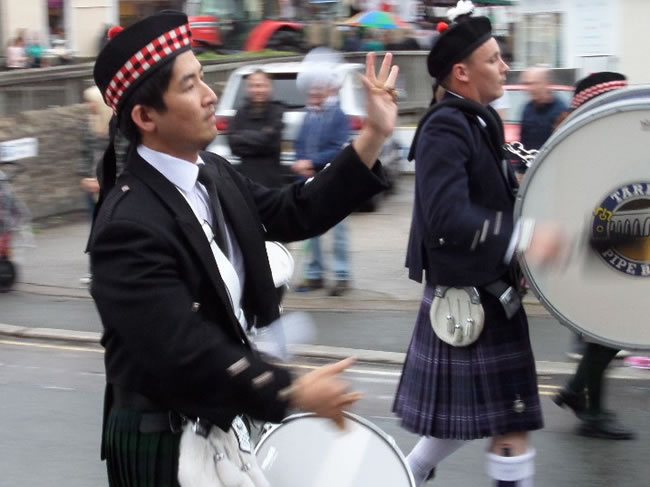 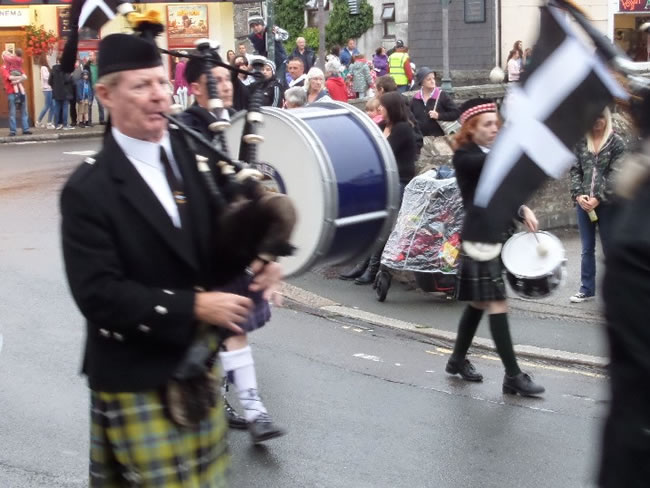 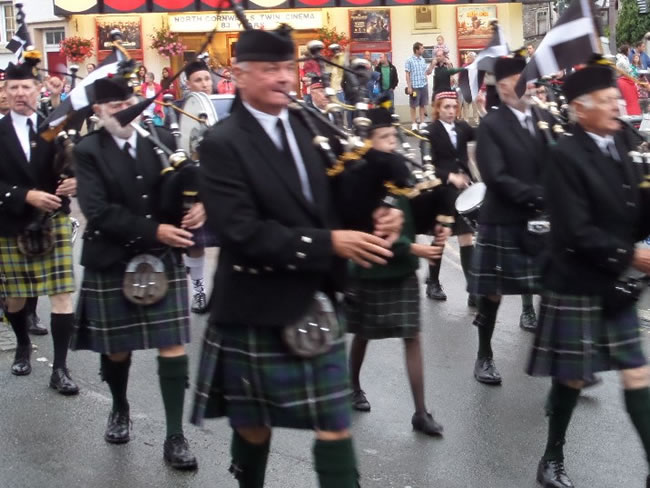 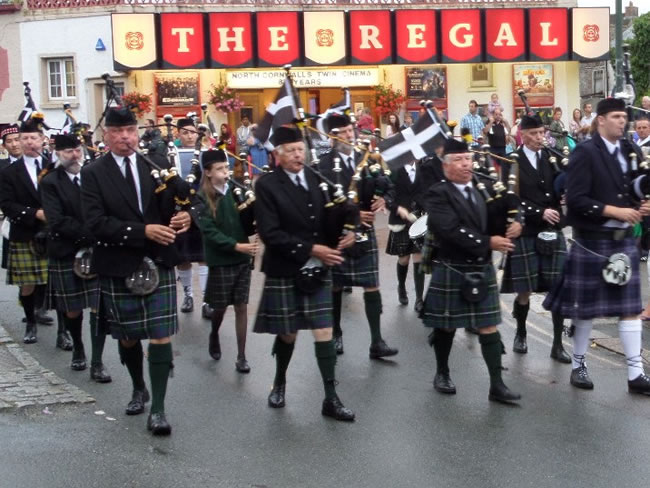 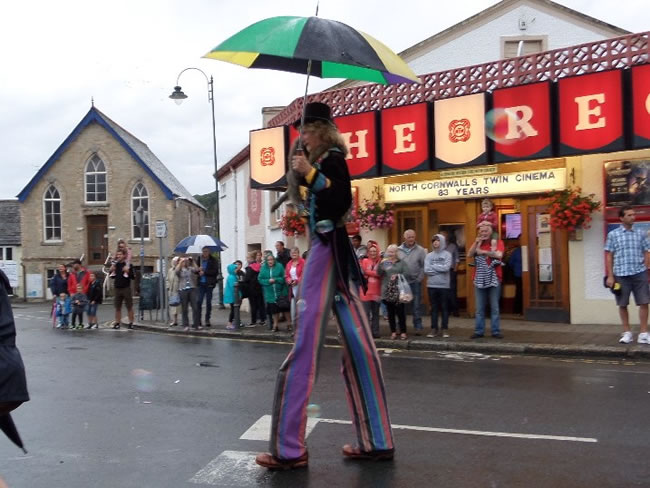 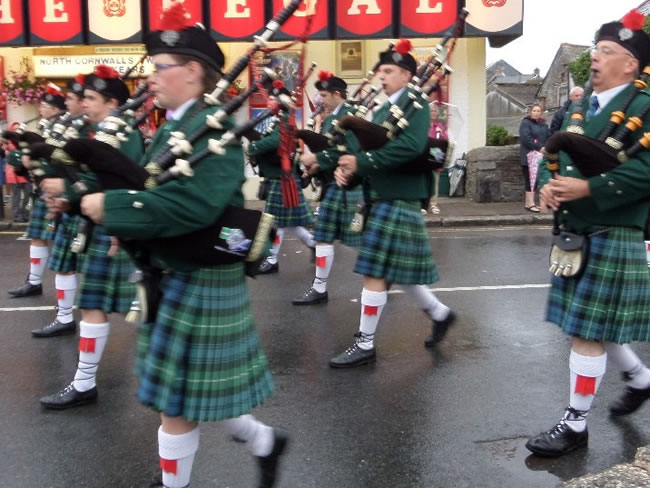 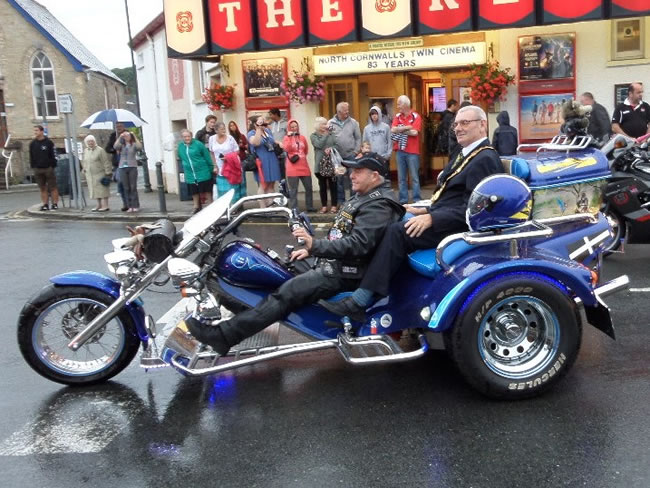 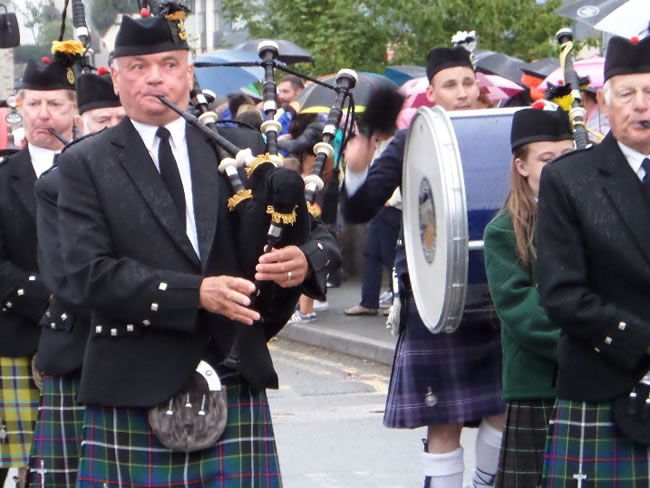 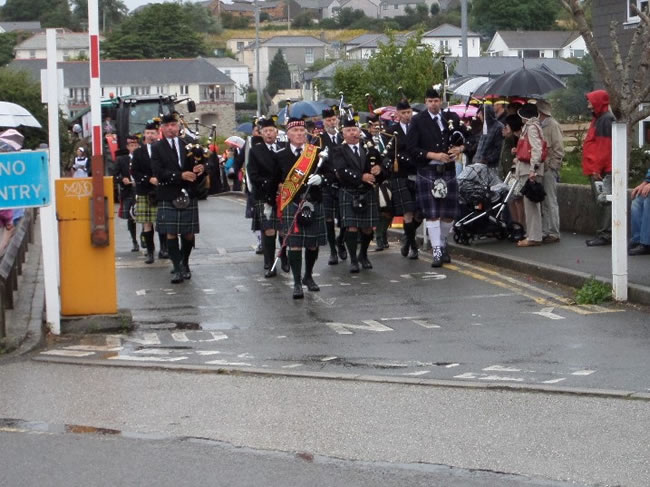 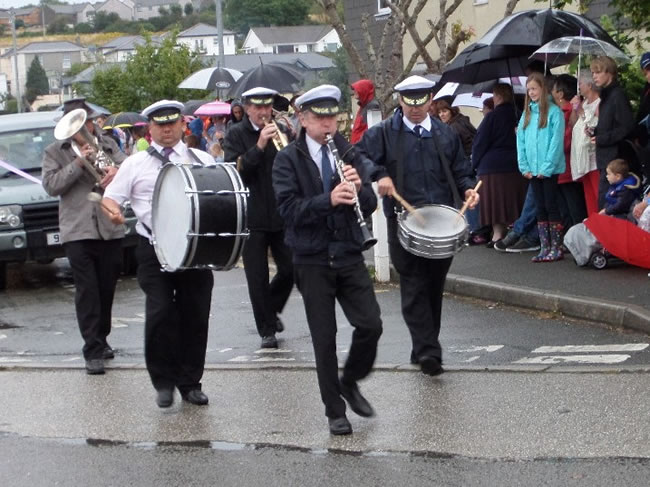 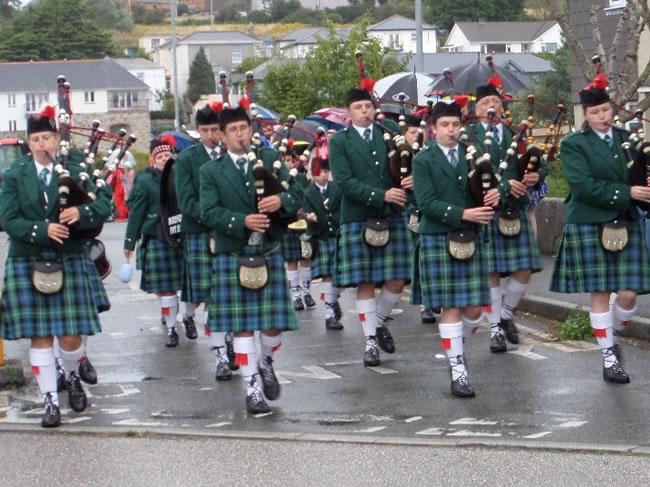 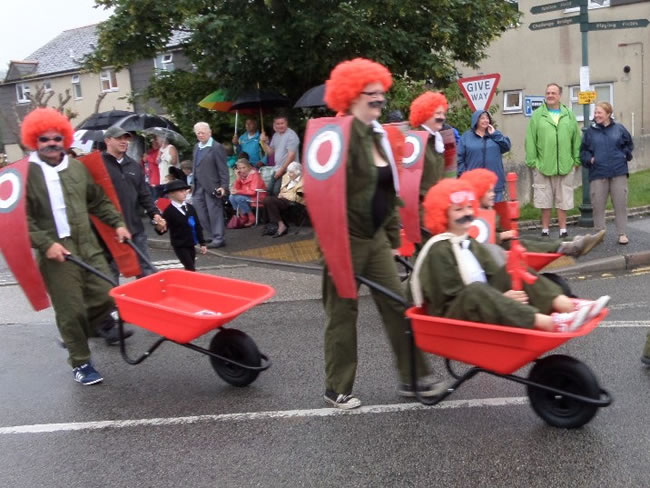 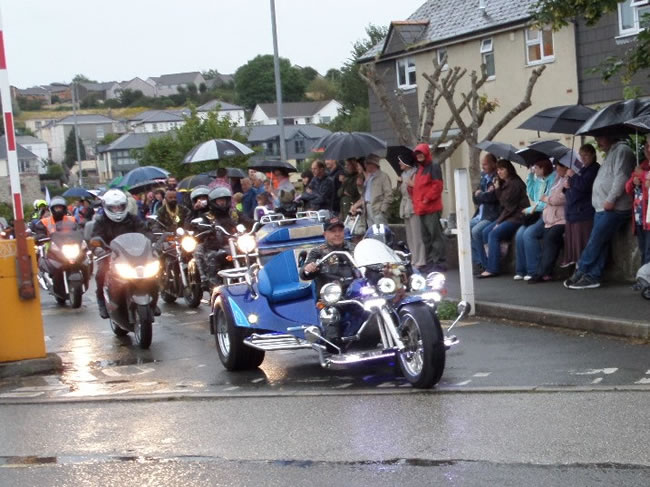 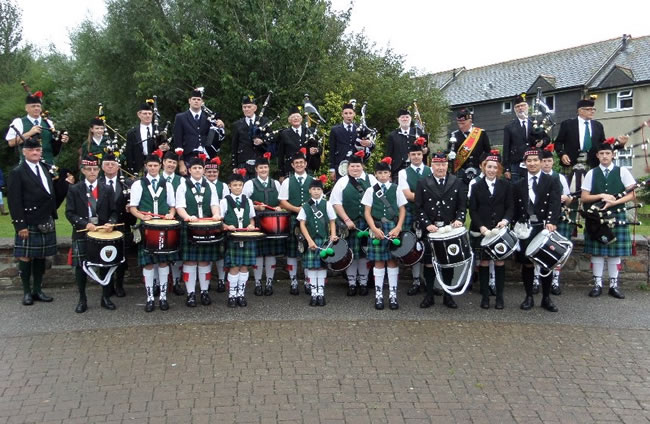 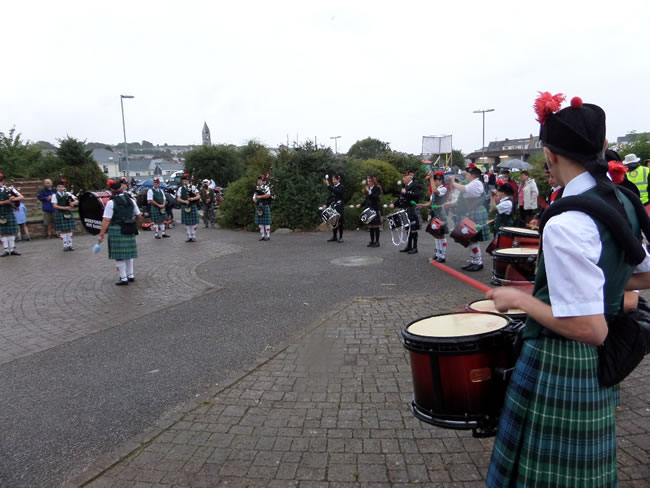 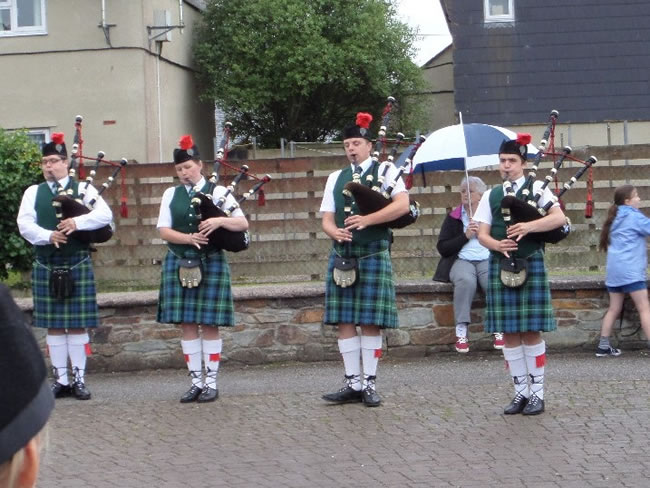 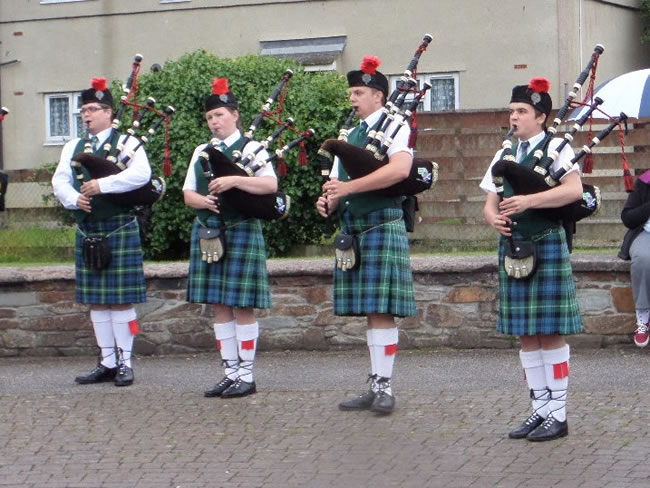 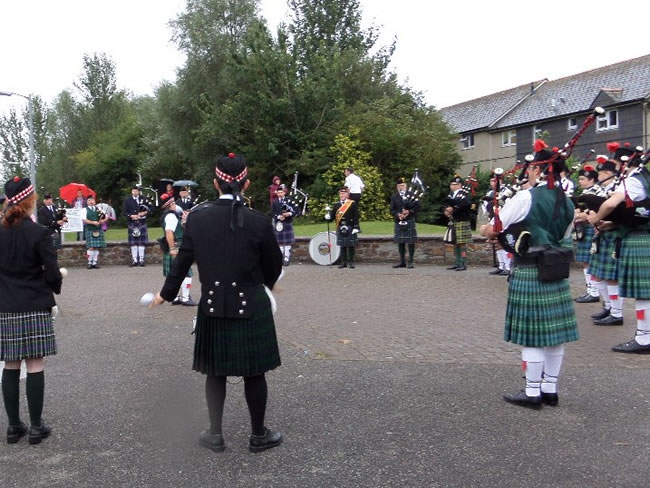 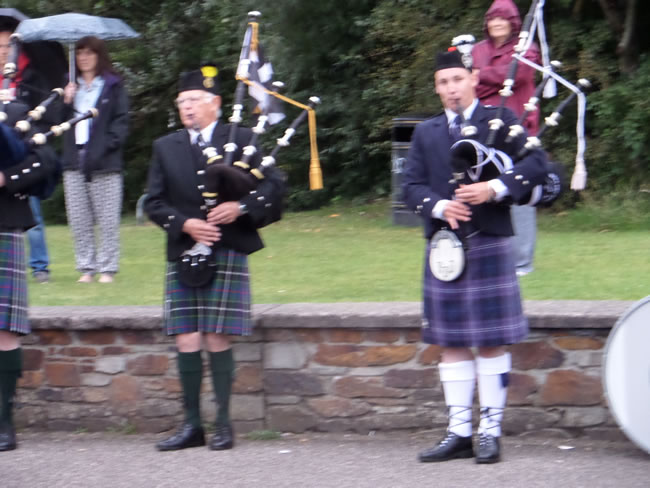 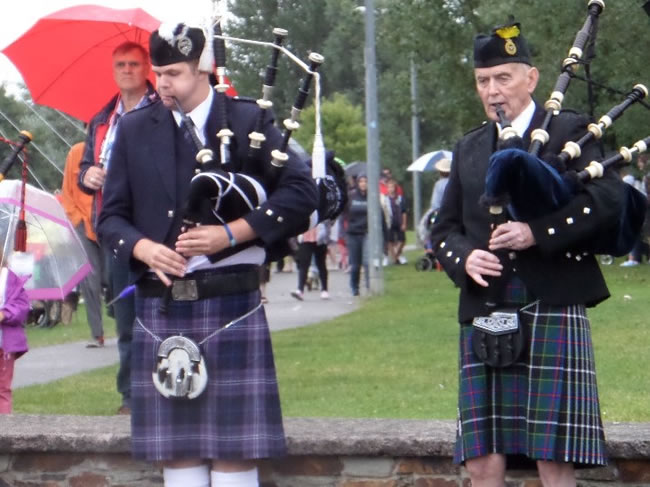 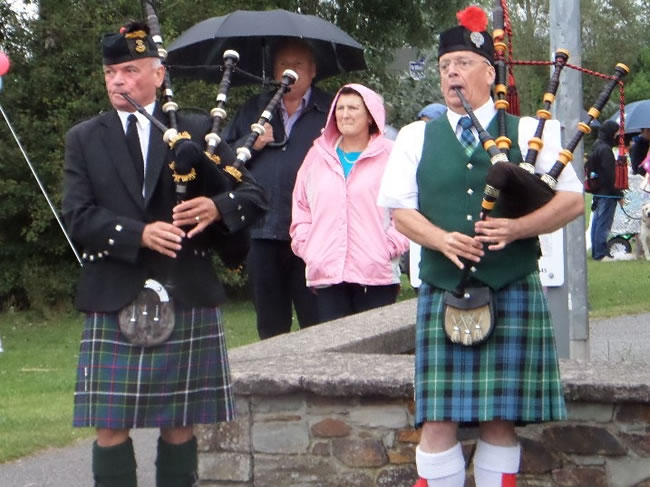 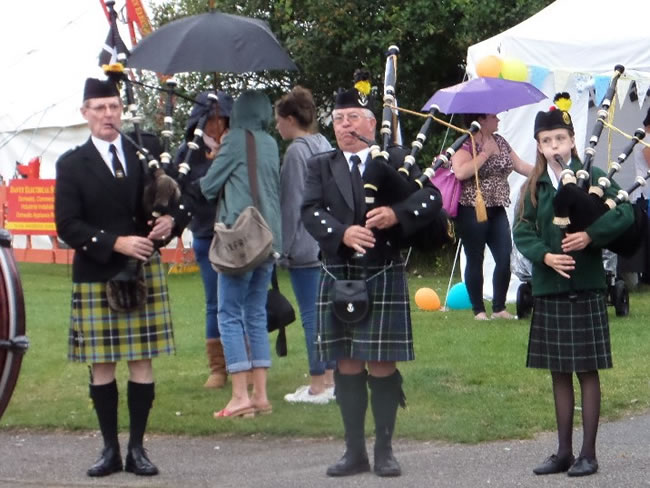 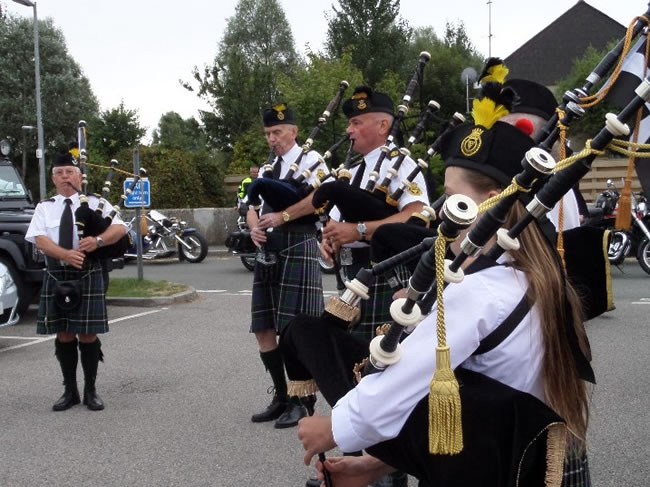 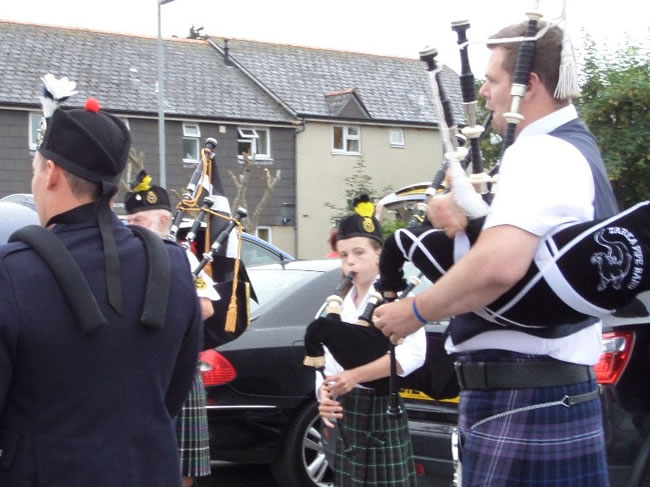 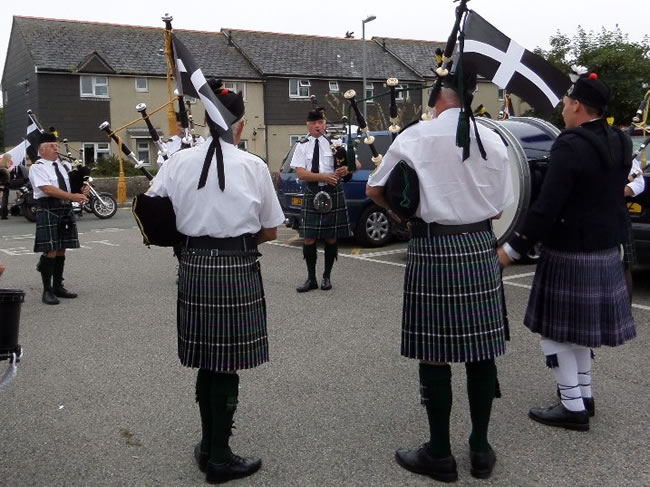