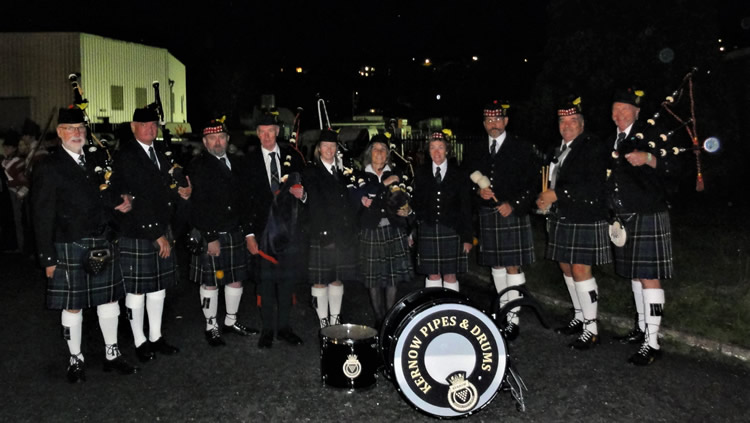 After the cancellation of the carnival last year for rain and strong winds, it was good to be back, despite the forecast again of rain all evening. Luckily it was not so bad! Good to meet up with Washy and the Devon and Somerset Fire Brigade Drum Corps again and also the Exmouth Pipers who were with them. Not such a long wait at the assembly point as previous years, as we enjoyed the tea and shelter of the British Legion!

Always a long slog up the hill to the left turn, which then gives a much more leisurely ascent to the town centre. The band played the Kilworth Hills, Castle Dangerous, Cockney Jocks and High Road sets with the drum corps playing a 6/8 beating in between times, at the end of which Steve started the band off again with a couple of taps, which all worked very smoothly. The Scotland the Brave set was played for the last few hundred yards from the South Gate, although a break in the parade gave an opportunity for Highland Cathedral.

Tired and a bit damp, we returned to the Legion for the now legendary buffet supper and a warming cup of tea put on by the ladies from the Legion. Marvellous!
Nigel