There was an overcast sky and slight drizzle of rain right up to the start of the Falmouth Marching Carnival at 18.35 hours. The meeting place was the Rugby Club Ground and the Band had assembled well before that time for a short practice session. Dress was Day Dress and initially shirt sleeves but as it became cooler jackets and ties were worn.

As the Rugby grounds filled up with revellers it was clear the Marching Carnival was going to be a very noisy and exciting event as drums were banged and whistles were blown. There were characters dressed as the previous and present Doctor Who standing outside the blue TARDIS – a chance for a Band member to pose in a photo shoot. It was good to meet up again with the Red Barrows who were last seen in Saltash at the Lions’ May Fair.

The Band’s position was in front of the last entrant – two magnificent shire horses pulling a large replica of an ancient bus. Other bands taking part were the Falmouth Marine Band, who led the Parade dressed as formidable characters from Star Wars, the Dakadown Samba Band, and The Golowan Band.

The Kernow Band stopped 4 times to play a medley of tunes and all along the route was cheered and clapped in appreciation of their outstanding performance! On arrival at the Church on the High Street the Band played Amazing Grace.  A lady started singing with the Band and on the enthusiastic encouragement of a certain band member the public joined in with the song which created an emotional moment in the crowd – “enough to bring  tears to your eyes” recalled one band member. The crowd would not let the Band go without an encore and they subsequently played “The Skye Boat” song.

The overcrowded pavements were buzzing with excitement as families jostled for a good view of the colourful parade. The route was approximately 2 miles and fortunately mostly down hill – it started from the Rugby Pitch down through the town, past the sailing club to finish at the Maritime Museum complex. It was a somewhat dramatic end as the Marine Band were playing – and parted to let the Kernow Band  through – joining in impressively with their drums.

It had been a vibrant and enjoyable Marching Carnival with entertaining bands playing and fanciful participants thoroughly enjoying themselves. 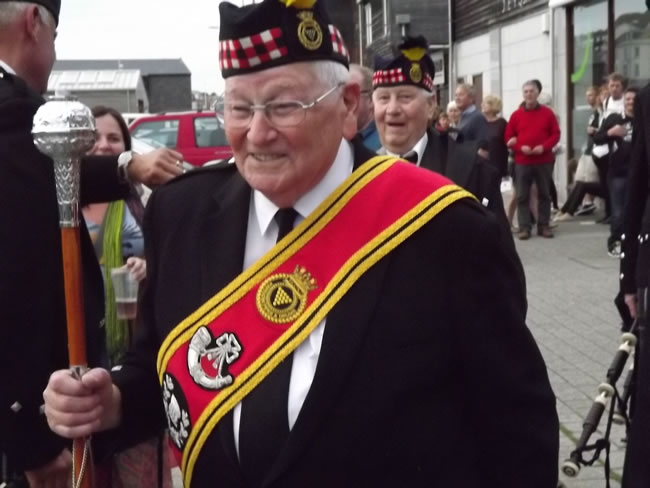 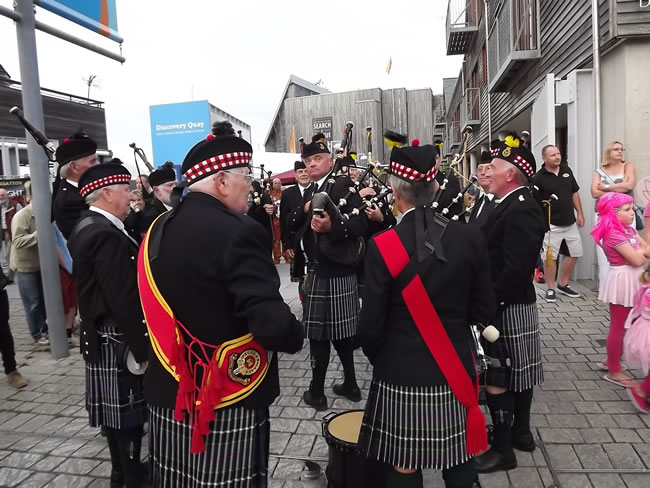 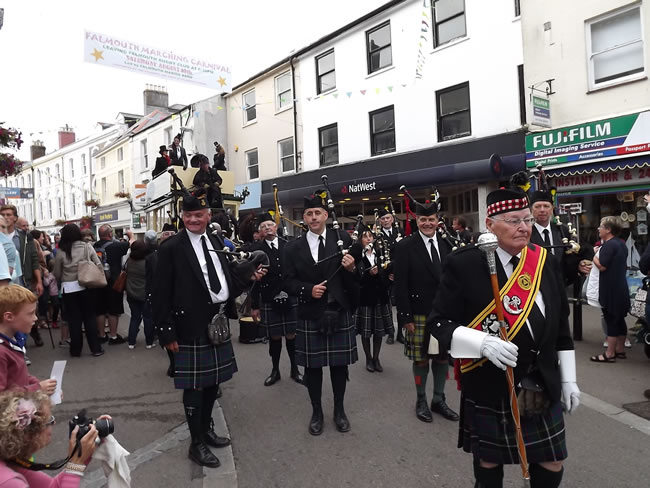 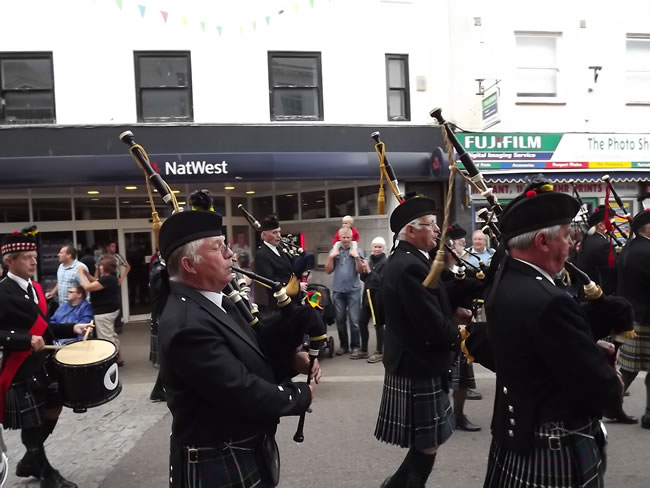 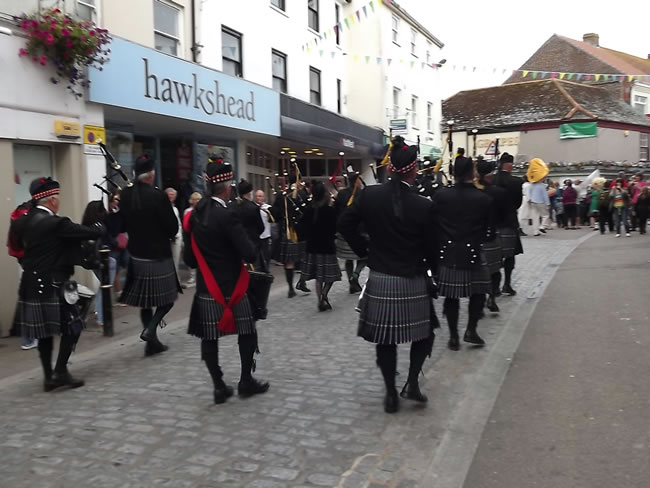 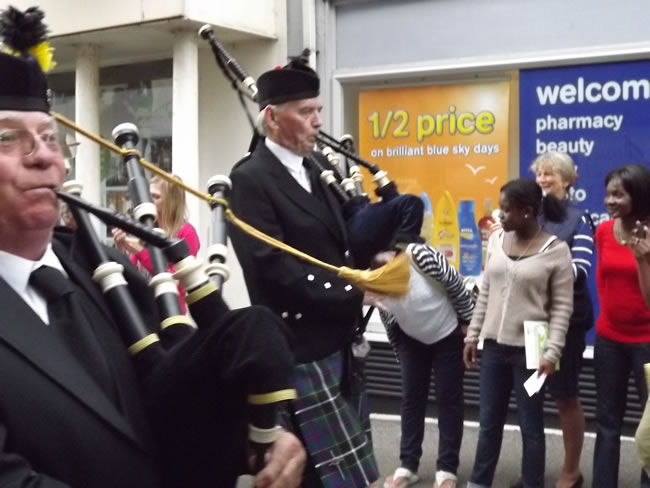 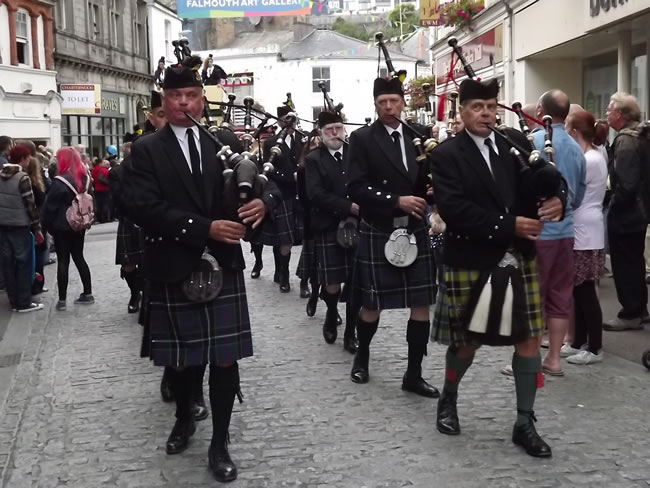 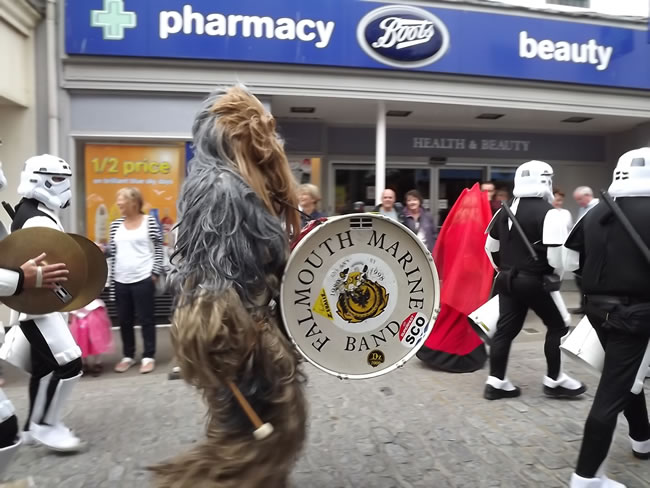 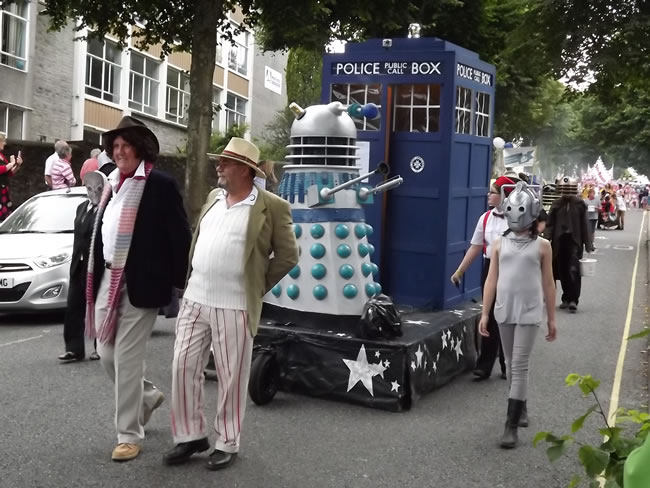 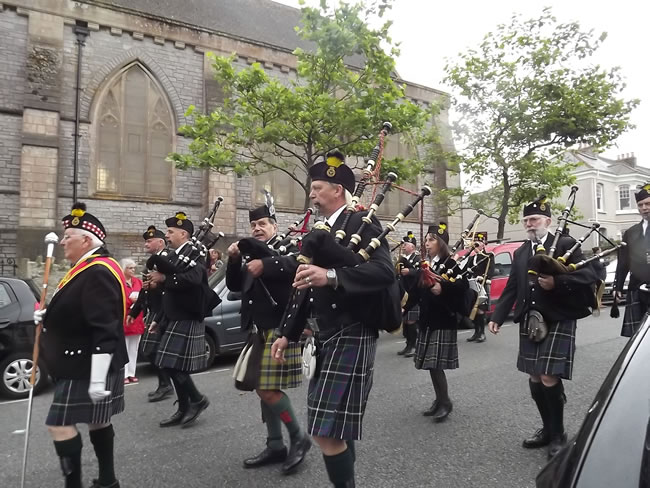 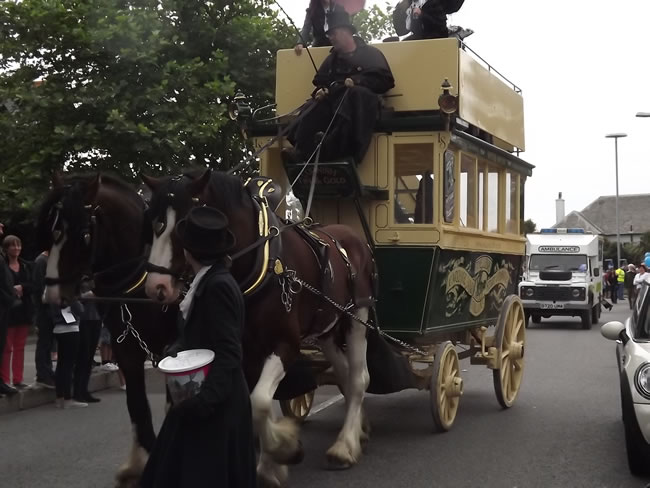 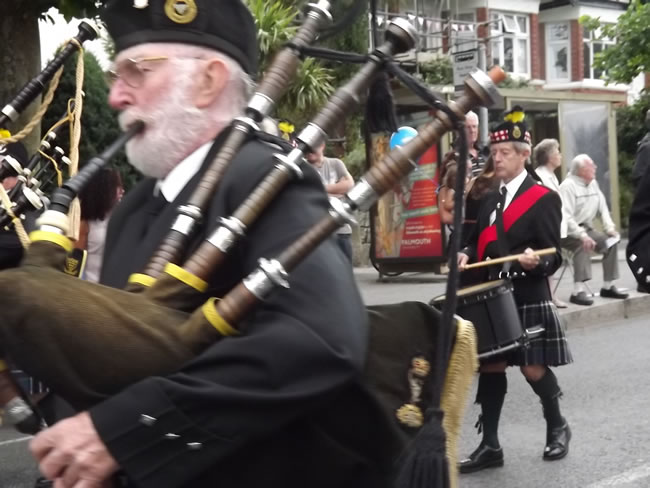 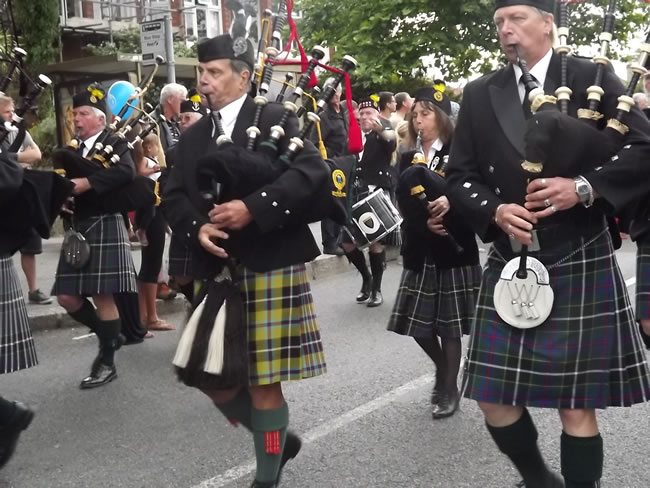 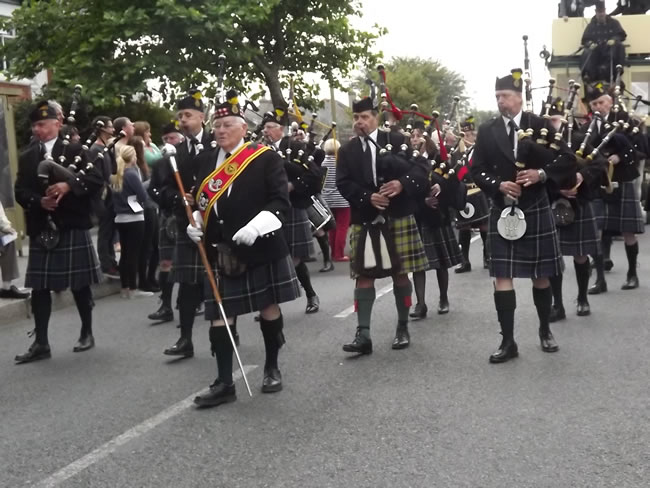 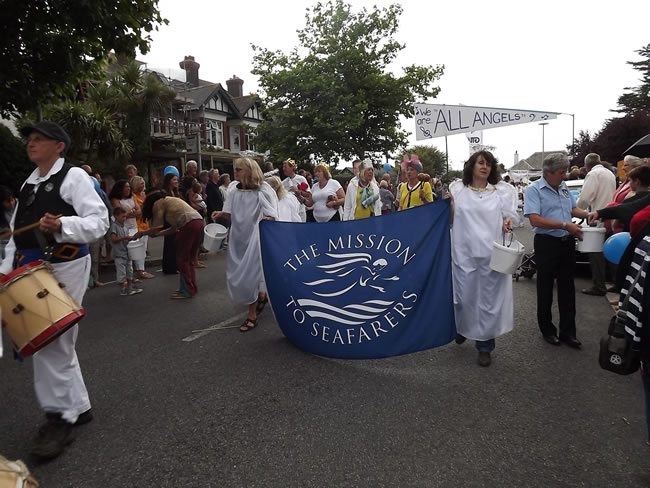 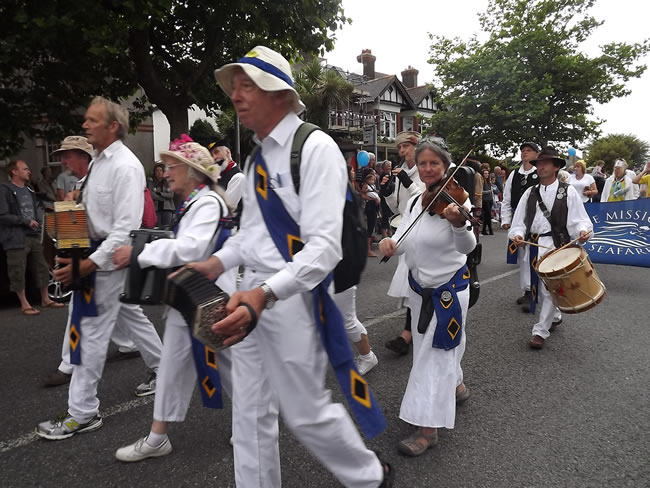 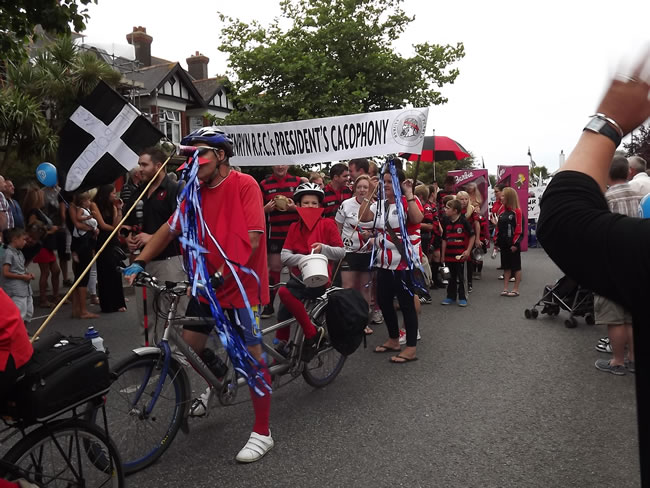 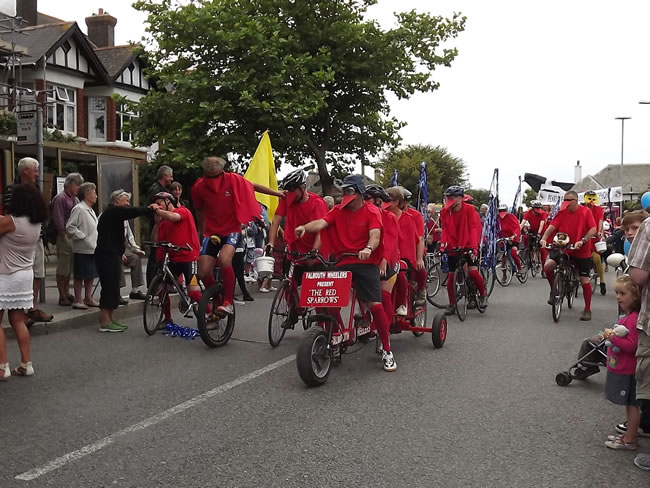 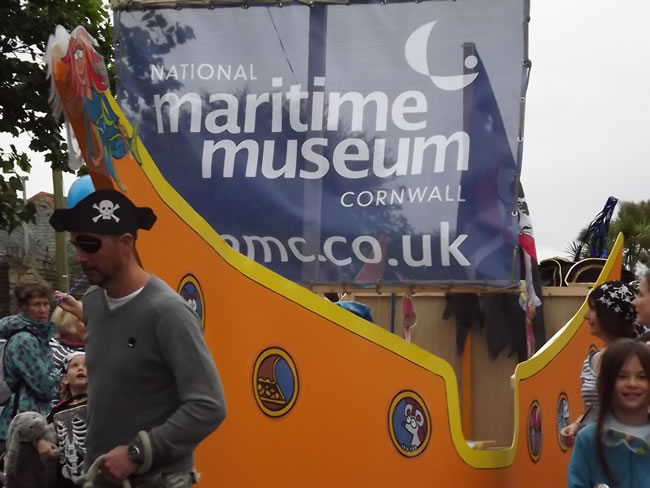 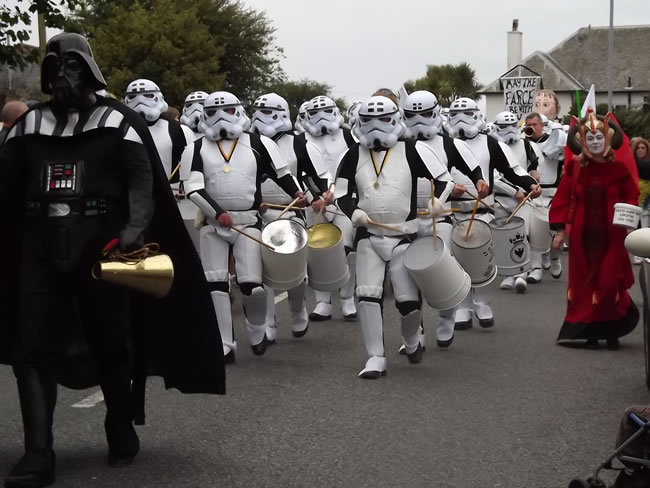 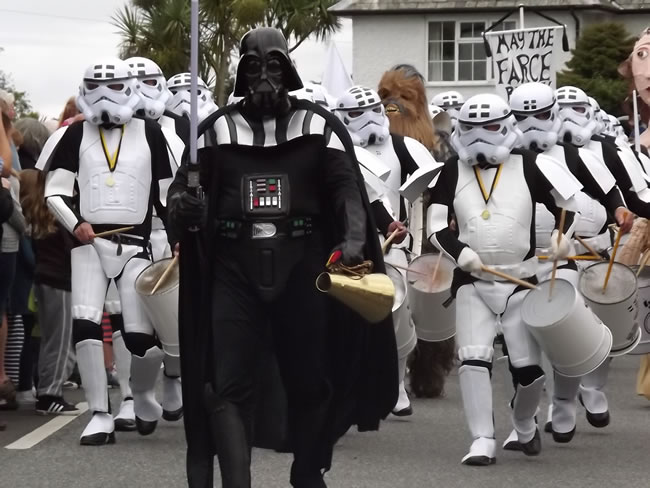 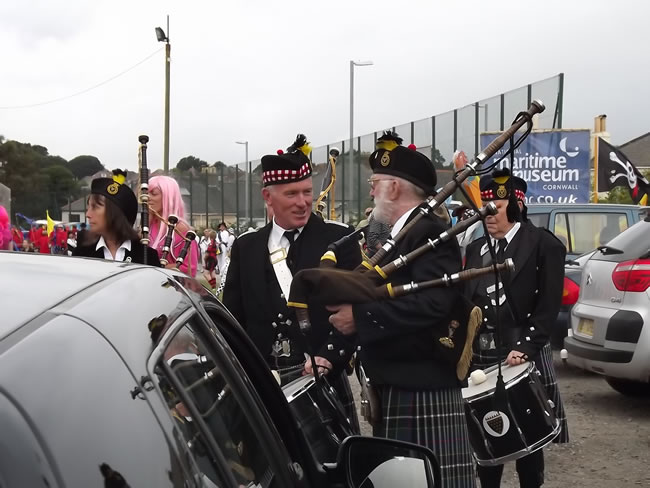 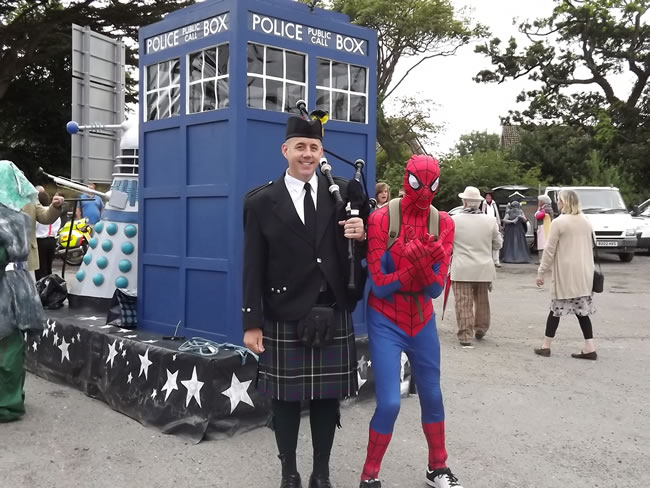