The forecast was good for the event, a bit cloudy but plenty of sunshine and the Kernow Pipes and Drums Band met in the Quarry car park for a warm up around 9.30 am in readiness for the Parade on the Moor. The venue for the Service was on the Prince of Wales Pier and by 10.45 the Band had assembled on the Moor along with the Royal Navy, Cadets, Standard Bearers, and Dignitaries.

Five members of the Devon and Somerset Fire Brigade Drum Corps made an exciting addition to the Parade as they supported the Kernow Band with their impressive drum playing. The Drum Major led the Procession followed by the Band, Standard Bearers, Royal Navy and Cadets, and Dignitaries. There were 9 Pipers and 4 Drummers in addition to the Fire Brigade Drum Corps and the dress code for the Parade was No 1s with bonnets. The pavements through the town were crowded with Saturday shoppers and onlookers.

On arrival at the crowded Pier and Commemoration Stone, the Service was opened with a prayer to give thanks for the freedom enjoyed by the population enabled by the sacrifice of the servicemen during the two world wars. The Exhortation was said, the Last Post was played followed by two minutes’ silence on the stroke of 11.00 hours and then the Reveille was played. The Lord Lieutenant of Cornwall began the wreath laying and at 11.10 hours prayers were said before the Blessing was given.

The Parade reassembled on the road and marched back to the Moor where the Freedom of the Town of Falmouth was given to the Royal Navy Association of the Falmouth Branch, “as on this 14th Day of March 2014 – freedom to march with swords drawn, bayonets fixed, flags waving and drums beating” to which the President of the Royal Navy Association accepted “this unique honour with thanks”. The document recording this momentous occasion was then proudly displayed to the large cheering crowds and photographers by two Royal Navy Cadets. Tunes played during the morning included: Waters of Kyleskuu, Skye Boat Song, Morag of Dunvegan, Green Hills/Battles O’er, Scotland The Brave/Rowan Tree/Wings/Bonny Galloway, Scotland The Brave/Mairi’s Wedding, Collin’s Cattle/Shoals of Herring, Cockney Jocks/Rainbow Country/Bluebells of Scotland.

The Parade marched back through the town to the Yacht Club where the dignitaries entered the Club and the Kernow Band and members of the Drum Corps were brought to a halt. The President of the Royal Navy Association of the Falmouth Branch thanked the Bands for their hard work and taking part. The Drum Major then dismissed the Bands after first mentioning refreshments were available inside the Yacht Club. It had been an impressive event made extra special by the outstanding performance of the combination Bands. 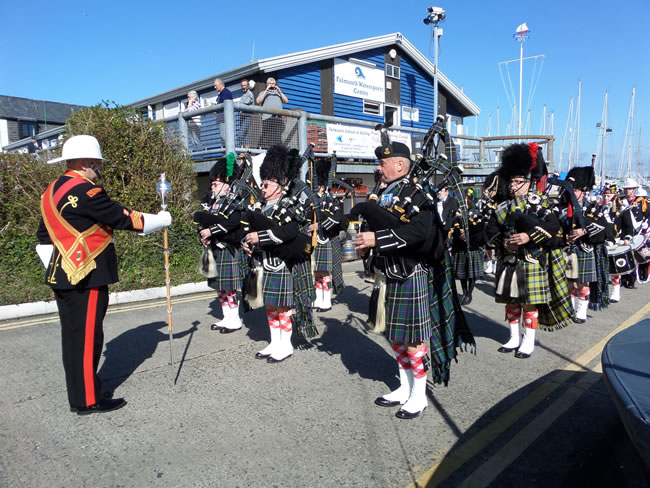 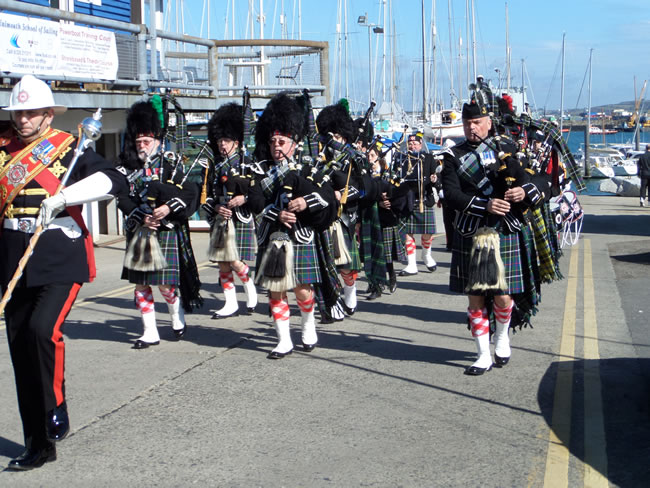 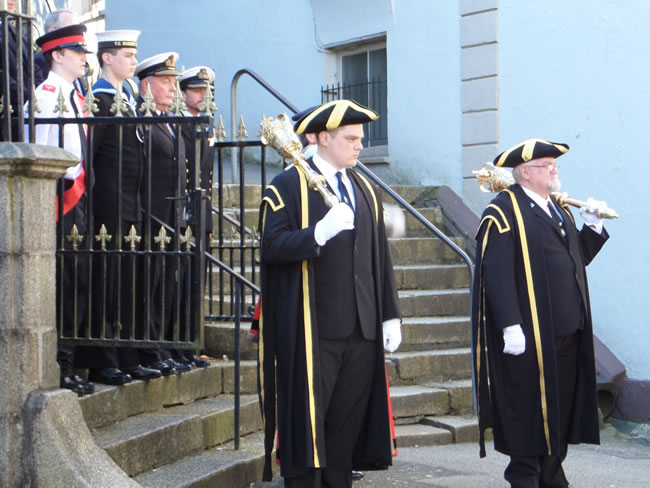 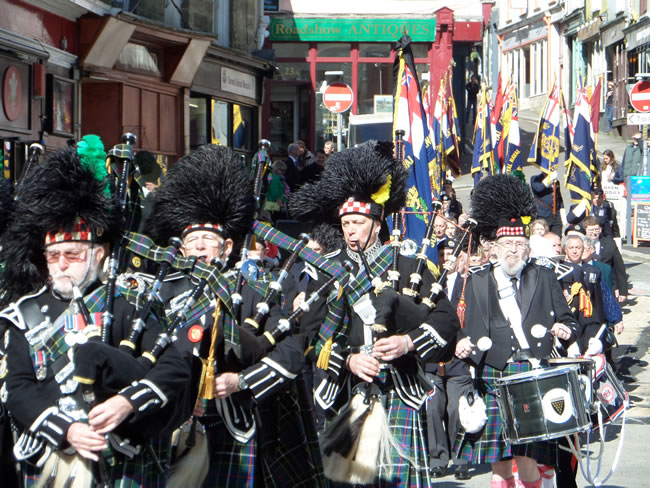 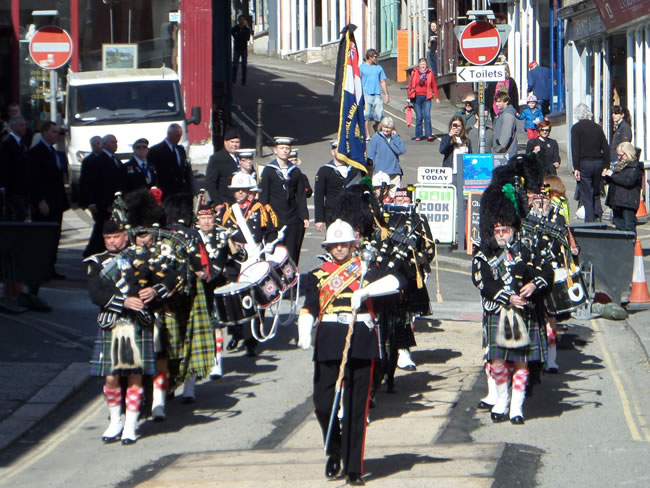 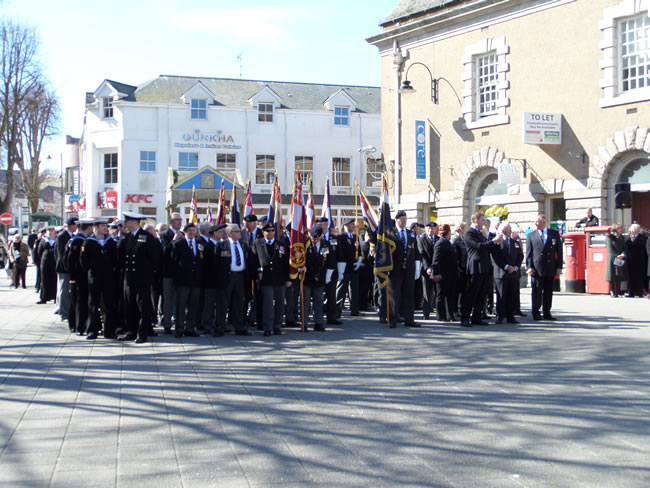 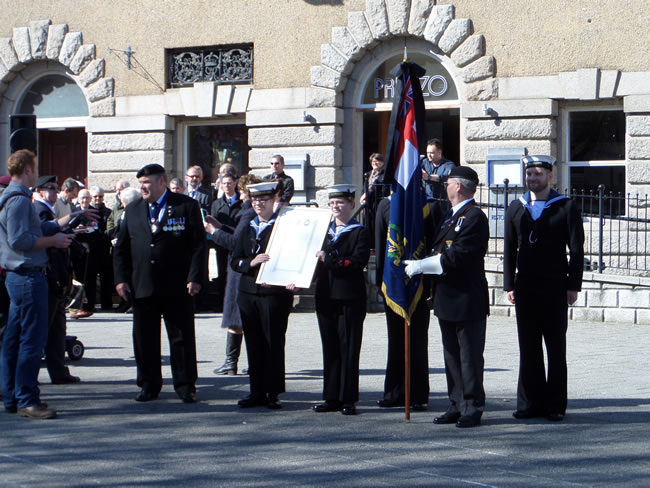 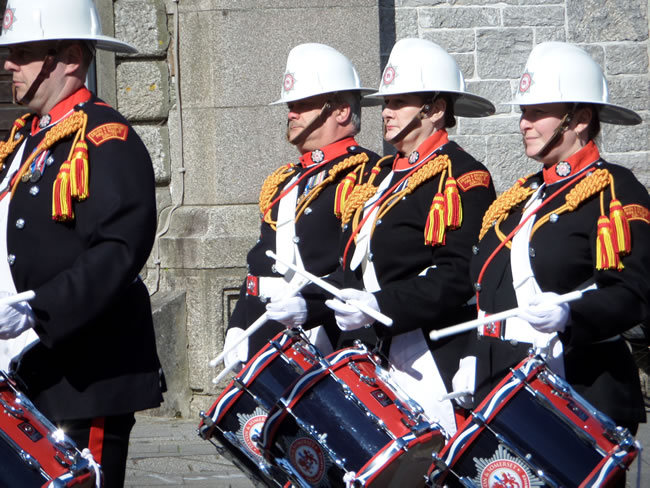 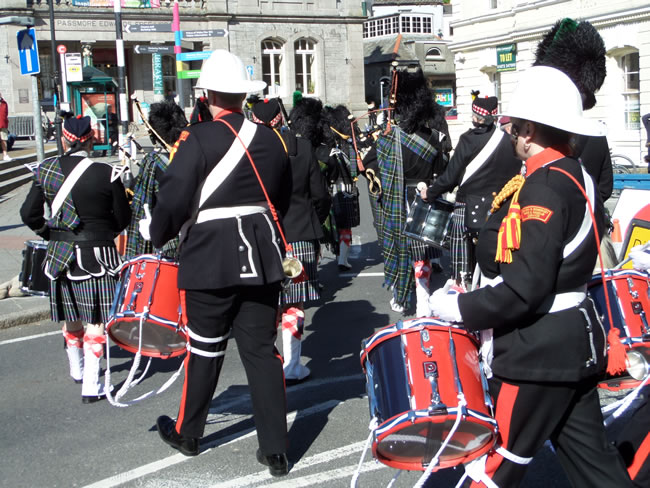 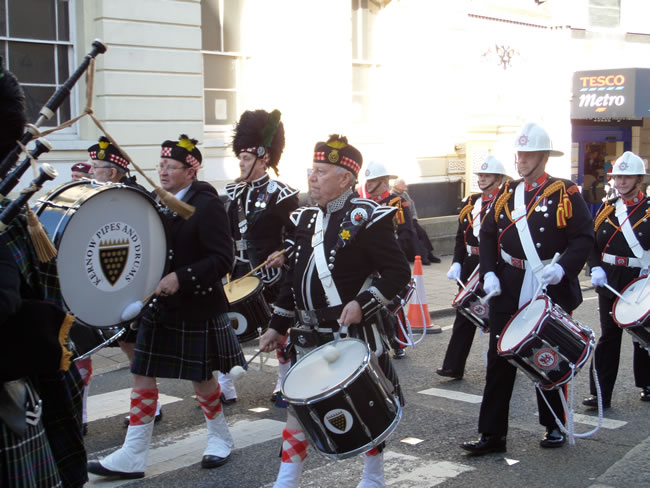 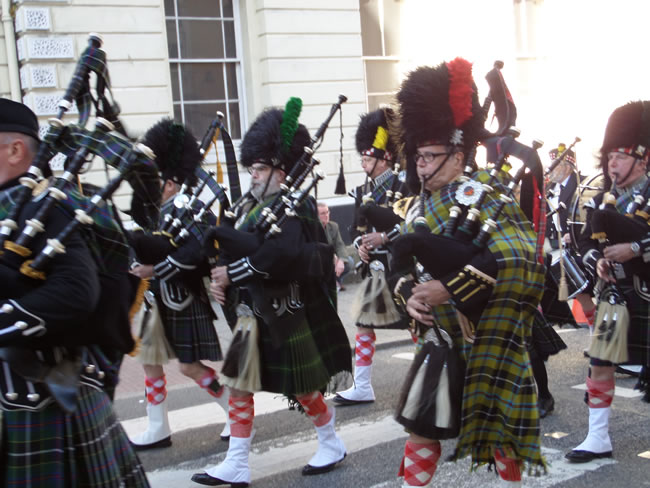 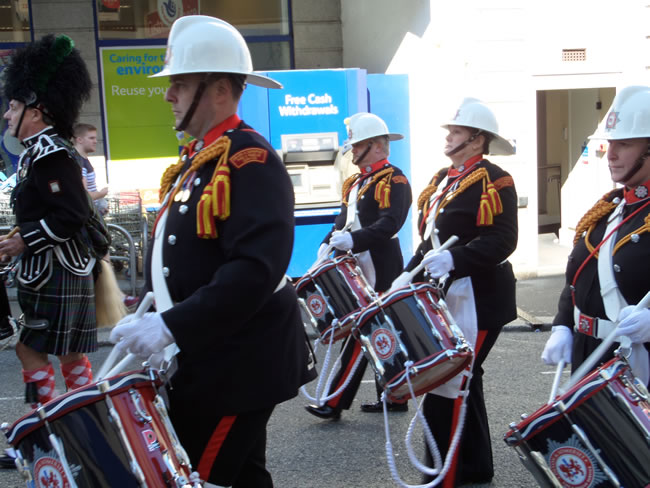 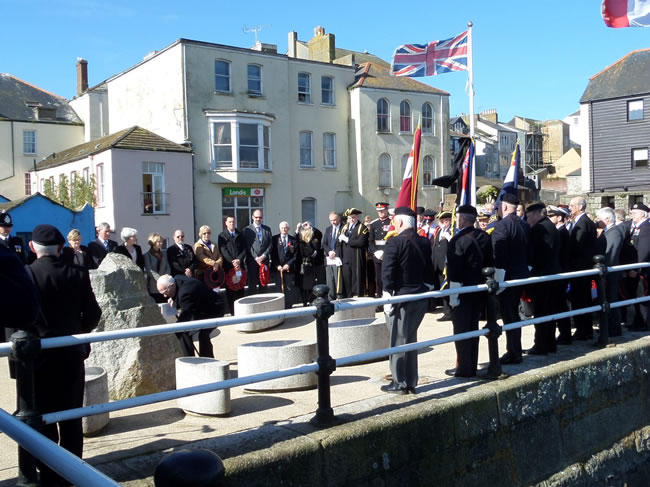 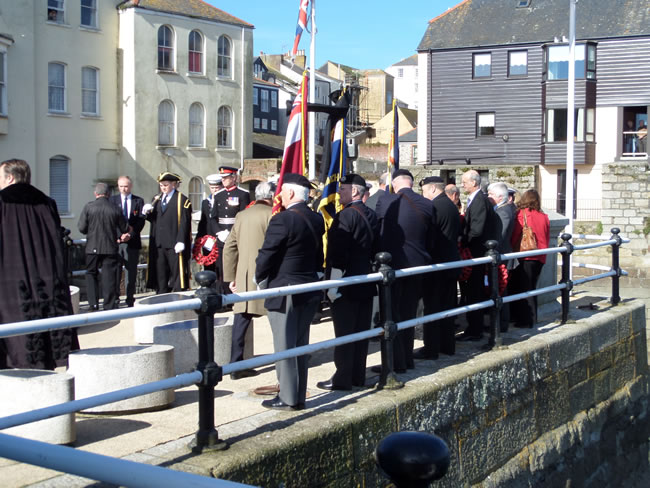 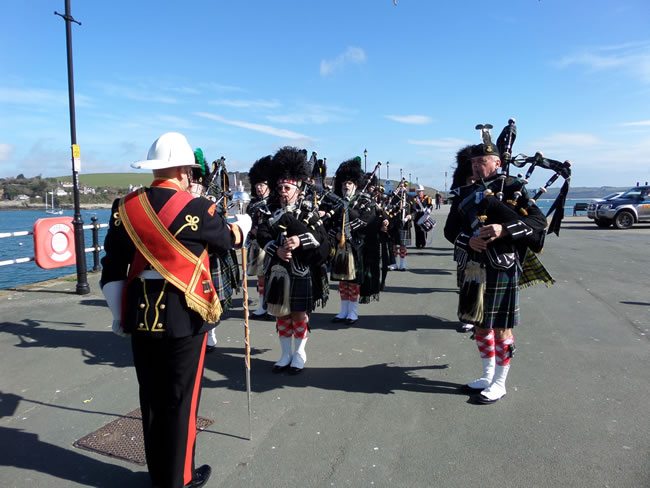 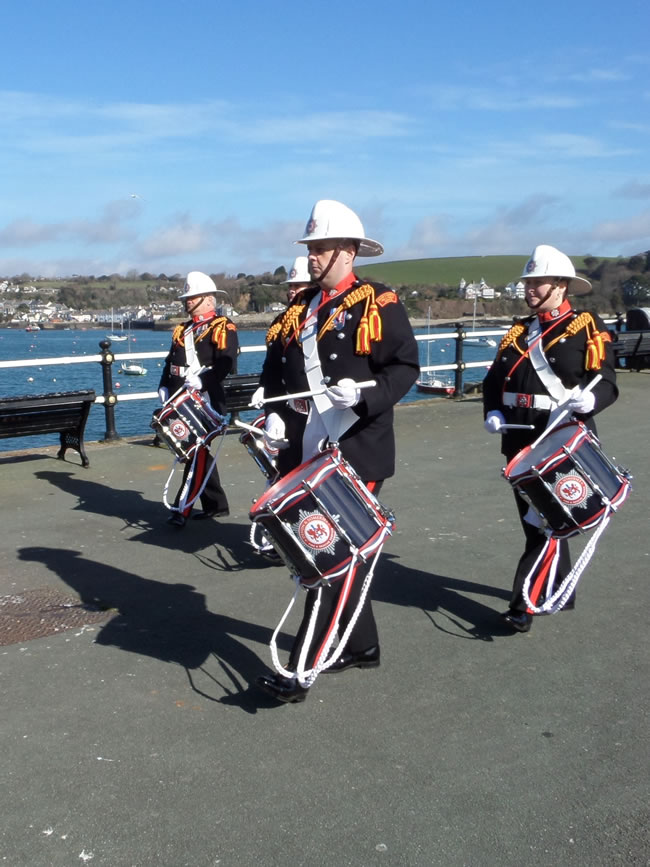 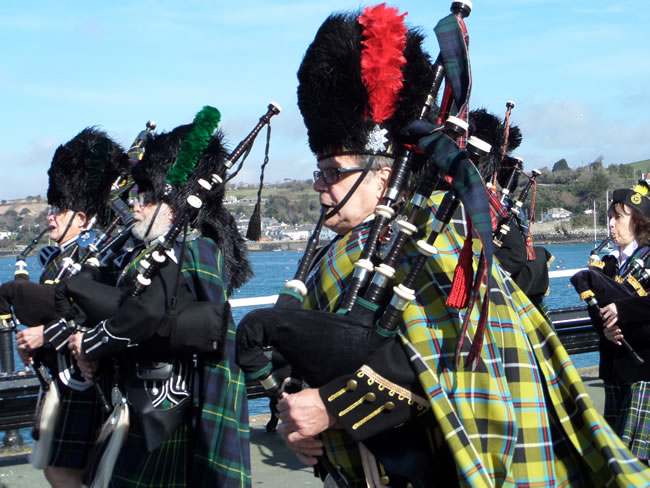 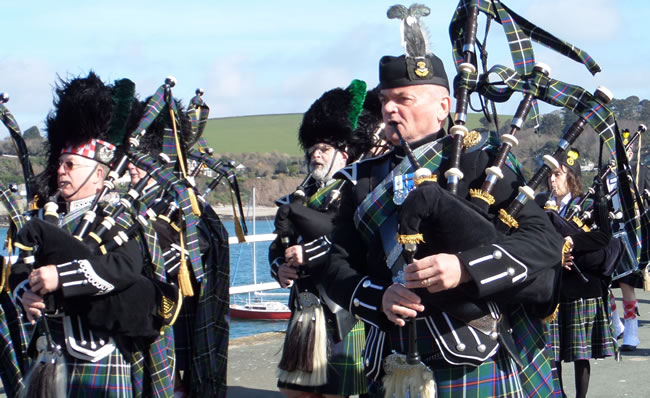 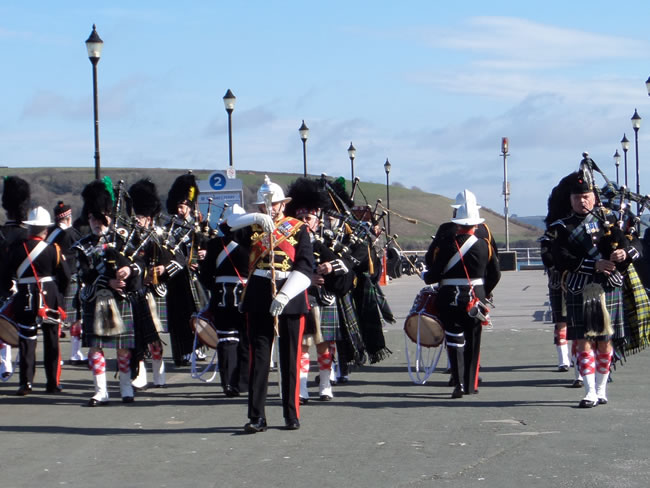 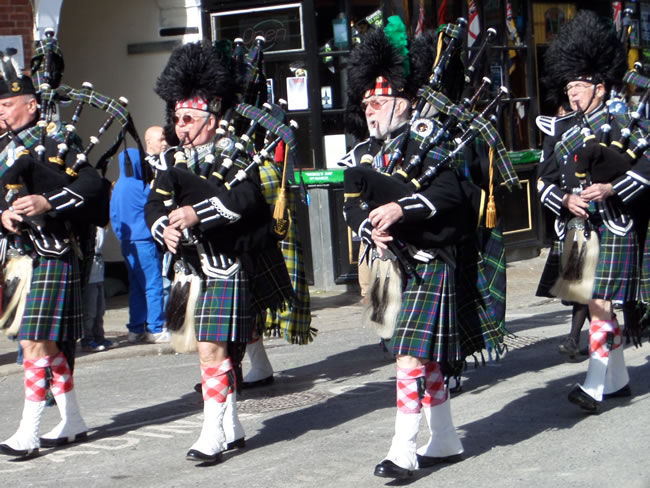 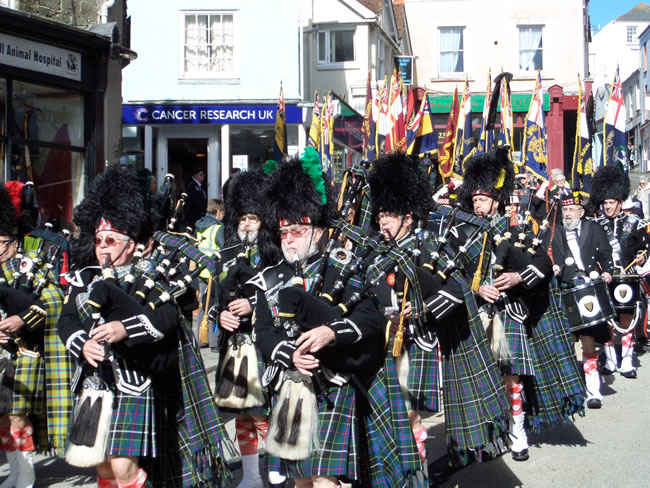 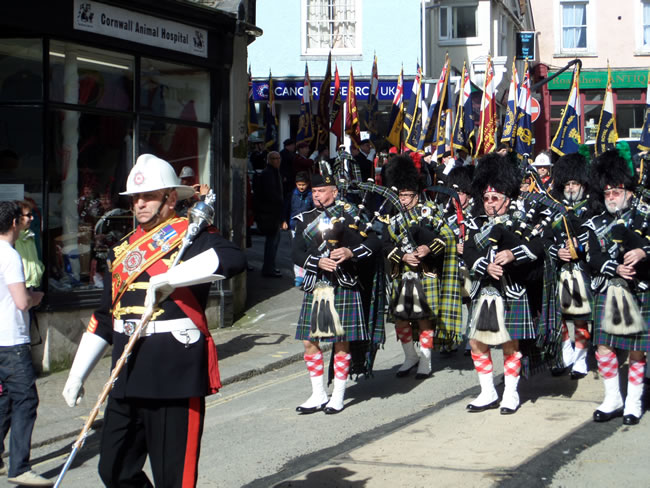 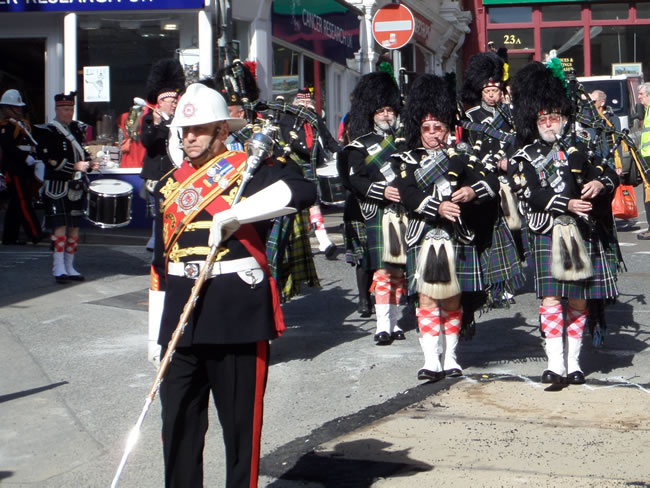 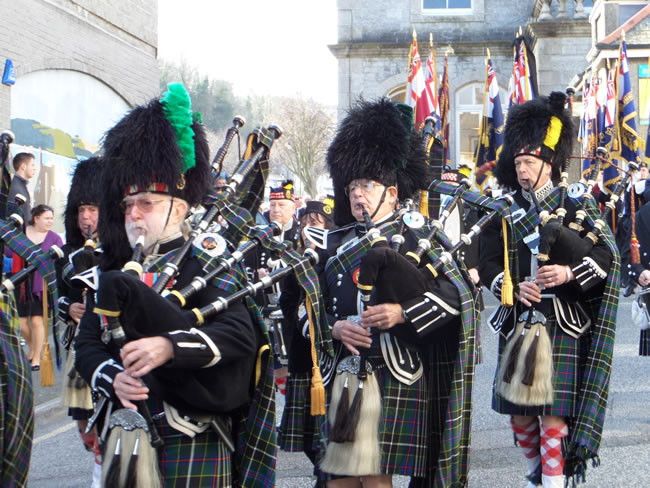 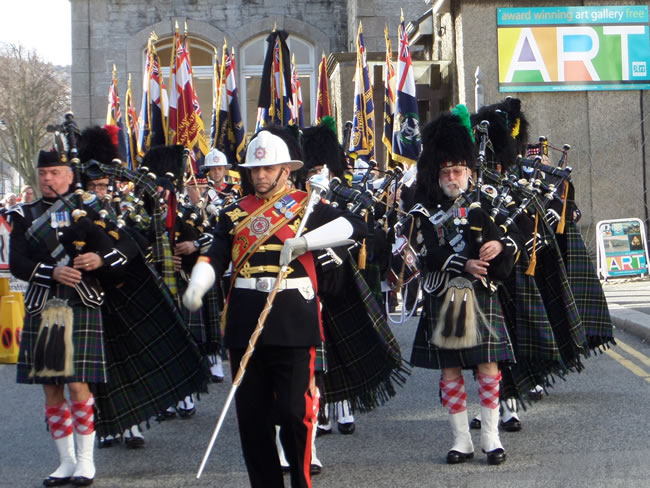 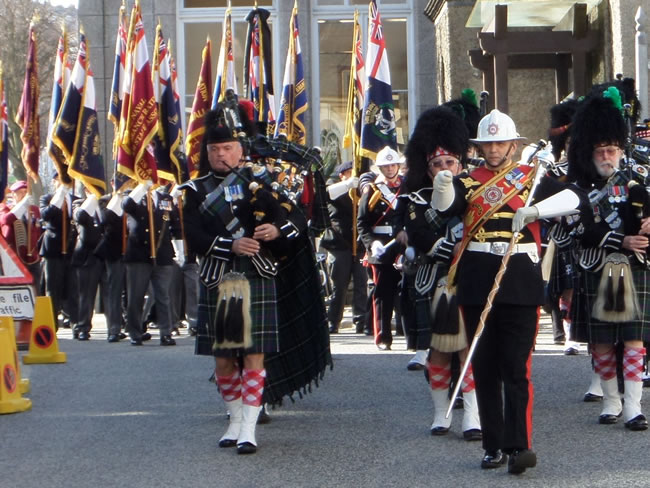 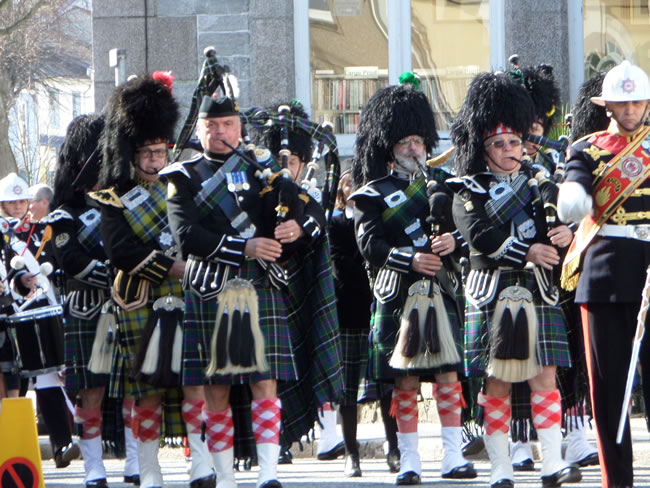